The LIGO Laboratory congratulates Matthew Ball of the University of Oregon for winning this year’s LIGO Laboratory Award for Excellence in Detector Characterization and Calibration. Ball is recognized for his critical role in understanding correlated magnetic noise caused by distant lightning strikes, the only known environmental sources of correlated noise in the LIGO-Virgo-KAGRA gravitational wave detector network. Not only did Matthew conclusively establish the correlation between lightning strikes and magnetic-field sensors at LIGO’s two detectors (in the US) as well as the Virgo detector (in Italy), he found that the frequency of these lightning-driven disturbances overlap with the most sensitive range of the LIGO and Virgo detectors. Ball’s findings have important implications for future gravitational-wave searches, including searches for mergers of distant black holes and neutron stars. His results are also critical for searches for stochastic gravitational waves, an ever-present source that we would find in all detectors, potentially from violent fluctuations in the early Universe or a steady background of quiet merger signals. 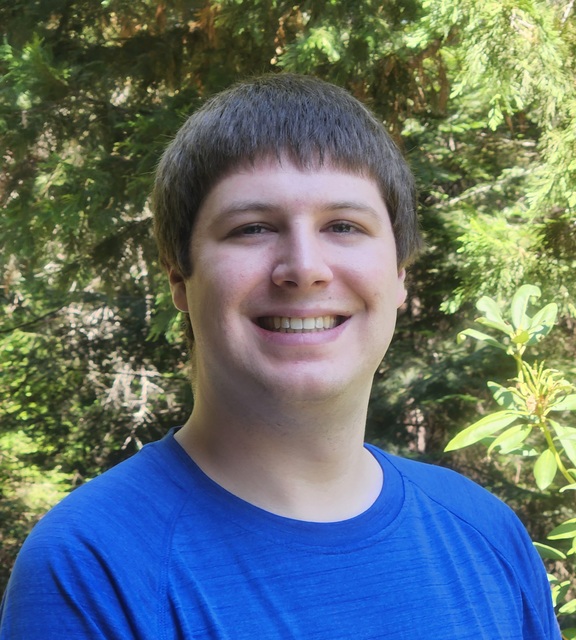 Matthew Ball is a fifth year Ph.D student at the University of Oregon. He received a Bachelor's degree in Physics from Oregon State University in 2018. As a member of the LIGO Scientific Collaboration's Detector Characterization team, Matthew explored how environmental effects could impact the LIGO detectors and developed methodology to study magnetic field effects due to lightning using LIGO-Virgo as well as external data. He is also interested in gravitational-wave burst searches for isolated neutron stars and what we can learn from them. In his free time, Matthew enjoys hiking around Oregon.

Ball’s study is the first work that experimentally demonstrated the correlation between individual lightning strikes and magnetometers (magnetic field sensors) at distant gravitational wave (GW) observatories. Using an external database of lightning strikes, Ball successfully reduced magnetometer coherence between LIGO Hanford and LIGO Livingston sites and conclusively established a correlation between magnetic noise and lightning strikes up to 9,000 km away from the LIGO detectors. Ball’s careful analysis of the database in conjunction with LIGO’s magnetometers showed that the majority of high-impact lightning events were found in the Caribbean area

Matthew Ball’s research is also the first study that shows that the frequency of these correlated magnetic disturbances is much higher in frequency than previously thought. Prior studies focused on lower frequencies, typically up to 50 Hz, under the assumption that correlated magnetic noise would be largely limited to Schuman resonances; resonances between the Earth’s surface and the conductive ionosphere at 7 Hz and harmonics (where harmonics are like musical chords at different frequency intervals). Even though Schumann resonances are very important for GW searches at low frequencies, Ball’s demonstration of the existence of higher frequency components that span the most sensitive range of the LIGO and Virgo detectors means that this noise could be an issue for searches for merging black holes and neutron stars too.

Ball co-led a paper [1] with Kamiel Janssens at Virgo to discuss their findings and estimate the impact of magnetic noise on the transient searches (Ball) and the stochastic searches (Janssens) for LIGO-Virgo’s most recent observing run, O3, and for future GW detectors. They found out that while this magnetic noise was not a problem for GW searches in O3 data, there is a risk that GW searches of data from future detectors like A+ and AdV+ could be seriously impacted without any mitigation of magnetic coupling.

Working with collaborators, Ball also found that lightning strikes induce electric currents in the detectors’ metal beam tubes, which his study found to be one of the important coupling mechanisms between lightning and GW detectors. This insight may provide important design guidelines for future detectors.

Matthew will receive a $1,000 prize and present an invited seminar at one of the LIGO Laboratory sites (LIGO-Hanford, LIGO-Livingston, Caltech, or MIT) to share his achievements with LIGO Laboratory members. He will also be presented with an award certificate at the next meeting of the LIGO-Virgo-KAGRA collaboration.

The LIGO Laboratory is also pleased to list two other projects as meriting honorable mention: