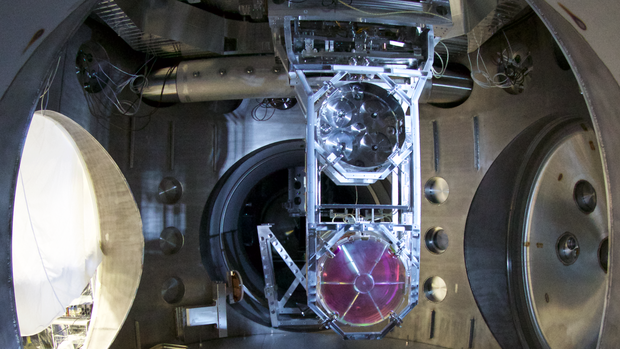 For an instrument that needs to remain as still as possible, it is ironic that LIGO is so sensitive that it can feel the smallest vibrations from near and far. LIGO is essentially a giant seismometer capable of sensing vibrations from traffic on nearby roads, weather patterns on the other side of the continent, staff biking alongside detector arms, the force of the Pacific Ocean rumbling over the Pacific tectonic plate many hundreds of miles away, and of course nearly every significant earthquake on the planet. Since gravitational waves make themselves known through vibrations in LIGO's mirrors, the only way to make gravitational wave detection possible is to isolate LIGO's components from environmental vibrations to unprecedented levels. The change in distance between LIGO's mirrors (test masses) when a gravitational wave passes is on the order of 10-19 m. To achieve this level of sensitivity, LIGO was constructed with multiple levels of active and passive vibration absorption or isolation systems. Some of LIGO's larger infrastructure that provides additional levels of isolation are discussed in previous sections. But LIGO's most sensitive components require even more complex and highly specialized mechanisms for isolating them from the smallest imaginable vibrations.

LIGO's mirrors (aka test masses) must be so well shielded from vibration that the random motion of the atoms within the mirrors and their housings can be detected. To achieve this level of shielding, each of LIGO's 40 kg test masses is suspended within a 360 kg quadruple-pendulum system (or 'quad').  This system of four pendulums (diagram below) significantly reduces motion at the level of the test masses where it really counts. Suspensions make use of both passive and active vibration isolation components. 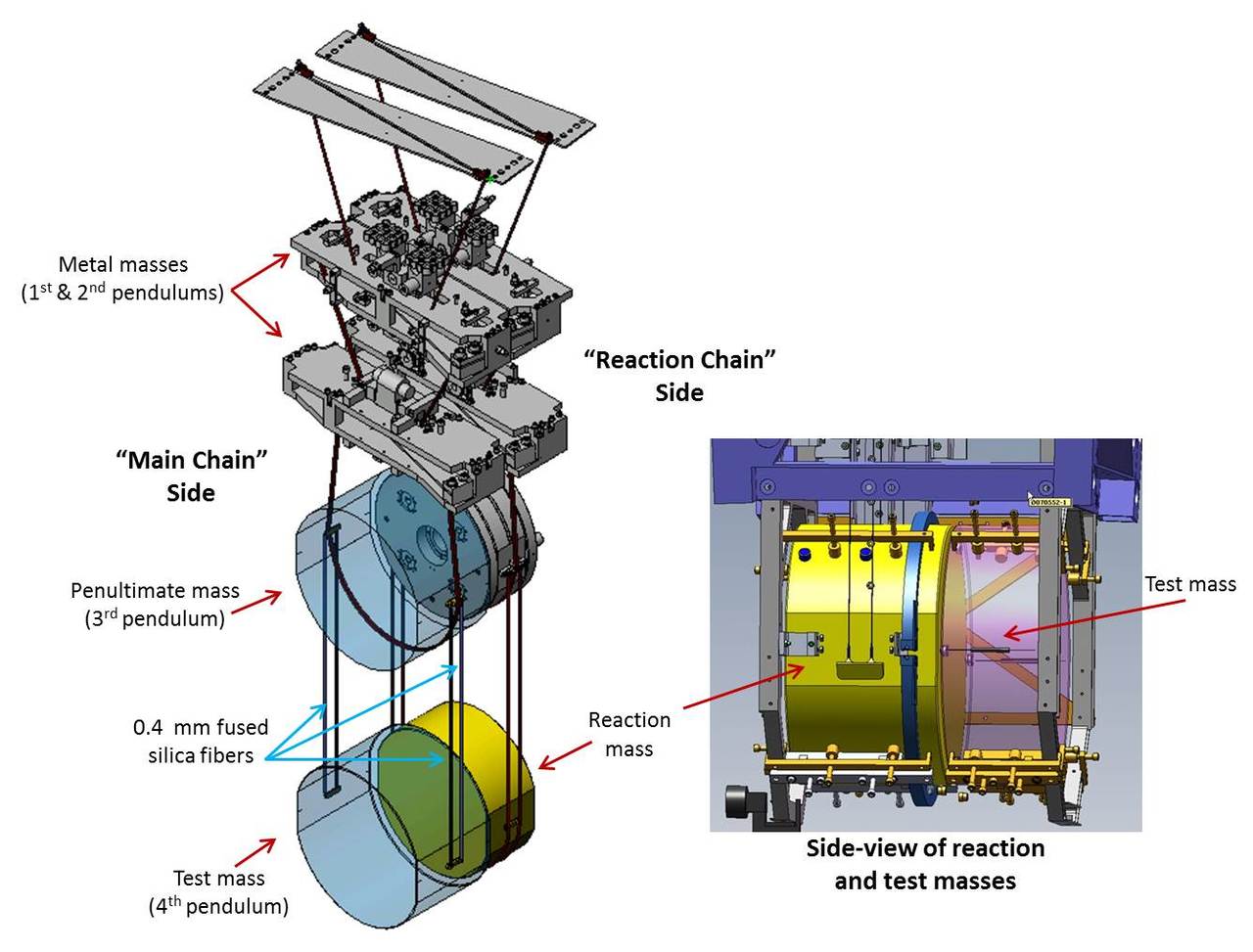 Two "chains" of suspended masses hang back to back in each suspension system. These are called the Main Chain and the Reaction Chain (see diagram above). Each chain contains four masses. In the Main Chain, the top two masses are made of steel, and the bottom two are made of pure fused silica (in the Reaction Chain, the upper cylinder is made of metal). The lower-most cylinder in the Main Chain is the test-mass, measuring 34 cm x 20 cm (13.5 in. x 8 in.), and weighing 40 kg (88 lbs.). This hunk of glass is suspended by glass threads 0.4 mm (400 microns) thick. These threads do not expand or contract in response to temperature variations, thus they isolate the mirrors from such thermal noise. The total weight of the four masses in each chain is 120 kg. 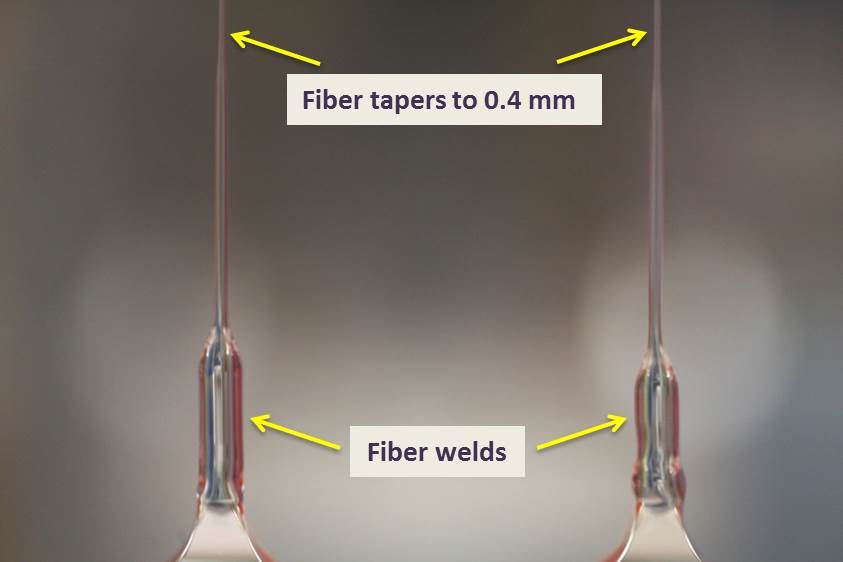 Close-up of fused silica glass fibers attached to one of LIGO's primary optics. The bottom of the photo shows the glass welds binding the fibers to the optic. The fibers taper to 0.4 mm. (Caltech/MIT/LIGO Lab)

To operate effectively, the lengths of LIGO's arm cavities (i.e., the distance between the test masses at the ends of each arm) must not vary by more than a fraction of a picometer (one-trillionth of a meter). To hold the masses steady and in place, we need to push on them (extremely carefully!) This is the role of the Reaction Chain. The upper two masses are controlled by simple motors made of permanent magnets and electrical coils that push on the masses. These 'voice coils' work like audio loudspeakers, with the coil producing a magnetic field which attracts or repels the magnets, which in turn gently moves the masses to counteract vibrations. On the test masses themselves, we use more gentle electrostatic forces, like those that attract balloons rubbed on a sweater to a wall (or hair to a comb on a dry day). The goal is to keep the masses perfectly still without physically touching them.

In these systems, internal seismic isolation platforms (ISIs) utilize position- and vibration-sensors (like seismometers) tuned to different frequencies of environmental vibrations, along with permanent-magnet actuators. Together, these feedback systems counteract ground movements, keeping the internal components of the interferometer virtually motion-free. This active level of isolation can reduce the magnitude of vibrations introduced to the suspensions (at the point of their attachment to the ISI) to a level of at most 2x10-13 m. The suspensions then take over, reducing this noise level nearly a million times more to help achieve LIGO's desired detection sensitivity of 10-19 m (the amount which gravitational waves expand and contract spacetime between the test masses).

In these ways, LIGO uses both passive and active vibration isolation systems to facilitate its ability to detect gravitational waves.