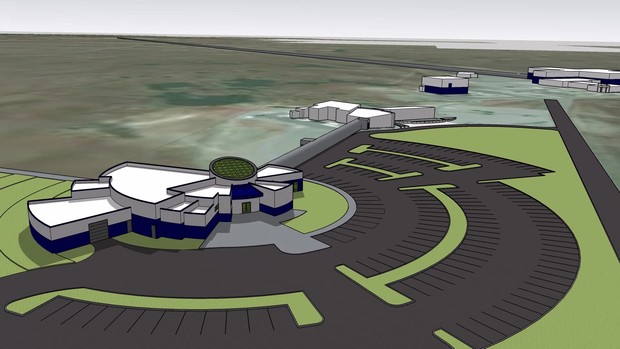 New state-of-the-art education facility in Washington State will teach students and the public about the marvels of gravitational waves and LIGO.

LIGO Hanford, one of two detectors making up the Laser Interferometer Gravitational-wave Observatory, or LIGO, has created a video to commemorate the groundbreaking of its new, modern educational center, located in Richland, Washington. Funded by a $7.7-million grant from the State of Washington, the LIGO Exploration Center will include 50 interactive exhibits and other educational display items, including a gold-plated 2017 Nobel Prize in Physics. Three key members of LIGO were awarded the 2017 Nobel Prize in Physics for their contributions to the observatory's historic 2015 detection of gravitational waves, or ripples in space and time; each winner receives additional medals to share with institutions and one of these will be on display.

"We are thrilled to launch the construction of the LIGO Exploration Center," says LIGO Hanford Observatory Head Michael Landry, who explains that, due to the coronavirus pandemic, his team planned a virtual groundbreaking video. "This brings us one giant step closer to the grand opening of the center, which will serve Eastern Washington and beyond with innovative and experiential STEM content." Landry and the staff at LIGO Hanford Observatory are employed by Caltech, which manages the observatories together with MIT.

The new center, designed by Terence L. Thornhill architects and to be built by DGR Grant Construction, is scheduled to open in January of 2022. It is expected to host up to 10,000 students each year in addition to many other public visitors. Exhibits will include interactive demonstrations including a giant funnel to demonstrate the principles of gravity.

"Previously, we had been hosting 3,000 to 4,000 K-12 students a year, in addition to bringing our scientists into classrooms," says Amber Strunk, education and public outreach lead at LIGO Hanford Observatory. "But with the growing interest in LIGO and its ongoing discoveries, we wanted to reach and inspire even more students of all ages. Our experiential science center will support STEM education in the region by providing opportunities for teachers, students, and families."

The grant for the project, which came from the Washington Office of Superintendent of Public Instruction, was facilitated by Washington State Senator Sharon Brown who "worked tirelessly on behalf of the students in her district to ensure that more children have a chance to experience, first hand, the groundbreaking science taking place right in their backyard," according to a LIGO web story.

"Building this LIGO Exploration Center has been a dream of ours for the past 20 years, and now thanks to Washington State we are making it happen," says Caltech's Dave Reitze, executive director of the LIGO Laboratory. "The center will communicate the revolutionary science and technology of LIGO in new ways that engage and inspire students from all backgrounds and ages to pursue careers in STEM."