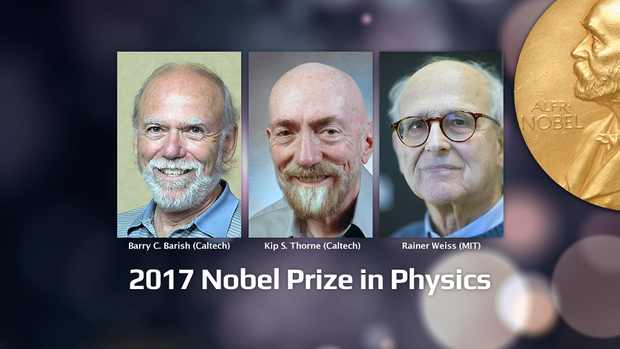 The LIGO Laboratory, comprising LIGO Hanford, LIGO Livingston, Caltech, and MIT are excited to announce that LIGO’s three longest-standing and greatest champions have been awarded the 2017 Nobel Prize in Physics: Barry Barish and Kip Thorne of Caltech and Rainer Weiss of MIT.

The announcement was made this morning by the Nobel Committee in Stockholm Sweden. First broadcast live, you can watch the recording here: Nobel Prize in Physics Announcement

LIGO Executive Director, David Reitze, had this to say in response to the win

“I’m positively delighted that the Nobel Committee has recognized the LIGO discovery and its profound impact on the way we view the cosmos. This prize rewards not just Kip, Rai, and Barry but also the large number of very smart and dedicated scientists and engineers who worked tirelessly over the past decades to make LIGO a reality.“

A flurry of congratulations from all over the LIGO Laboratory has come in:

“Rai made this happen, person by person and idea by idea. He really worked to enable individuals to help in the adventure, and no problem was too small to get his complete attention if it was in the way of success. Between the human legacy of a generation of scientists and engineers, and the scientific legacy of this step forward in physics, Rai earned this prize.”

“I began working for Rai in late '86, before the thing called LIGO was formed, but after he and the early team had been working on GW detection for more than a decade. As a hardware guy, I found working for him and the rest of the amazing instrumentalists in his ‘Gravitation and Cosmology Research Group’ at MIT to be a great pleasure. People who worked there were generous with advice and help for newcomers, largely because of Rai's generosity with ideas and help to them. Before long I had enlisted in grad school and we had joined with Caltech with a goal in mind, a goal that was to take nearly 30 more years to achieve.”

“It is not an exaggeration to say that the field of gravitational wave detection would not be what it is today without Rai. Most people recognize that he was the first person to envision a large detector and to identify (almost) all of the problems that would need to be overcome. What is less widely recognized is the large number of current leaders in the field who developed their skills working with Rai as a student or postdoc. Rai had an uncanny ability to draw the best out of each student, and to impart his particular style of approaching problems.  The resulting core LSC leadership is one of the most important parts of his legacy.

"[As for Kip Thorne] LIGO would not exist without Kip's vision for the scientific potential of gravitational waves and his skill in sharing that vision with other scientists.

"[Lastly] LIGO had to make the change from tabletop science to a real science facility. Barry understood what was needed, and he guided that transformation without ever losing sight of the scientific goals. I doubt that we could have ever moved forward if Barry had not stepped in. He had a remarkable ability to balance the conflicting pressures of cost and schedule without sacrificing scientific performance."

“Kip Thorne had the vision, intellect, patience, and dogged determination to bring LIGO from concept to reality in the 1980s and 1990s, overcoming the perception by many in the scientific community that ’LIGO is so complicated that it shouldn’t be built’. Kip is a renowned theoretical physicist, however remarkably to me, he also has a very deep understanding of the LIGO interferometers.  His group performed seminal investigations to understand and suppress light scattering, the nature of thermal noise, diffraction of laser beams in optical cavities, and the use of quantum-engineered light states for better interferometer sensitivity."

"LIGO was in trouble in the early 1990s, perhaps not too surprising given the tremendous complexity of the project.  Barry joined the project, and within a few years took a relatively small team from Caltech and MIT and grew it into a robust organization capable of building the observatories and the detector, commissioning the detector, and then making it work.  Barry made some difficult but ultimately correct technical decisions to move the project forward. He was the architect of the LIGO Scientific Collaboration, now over 1200 people strong, that do the science of LIGO. Barry made LIGO a reality.”

“I suspect that, for Rai, no recognition could compare to the excitement and gratification engendered by the actual detection. He has been in this game since before the beginning and is still in it. Few of us are fortunate enough to see our impossible dream become reality. Well done, Rai!”

Decades in the Making

While from the outside, it may seem surprising that this Nobel Prize was awarded a scant 2 years after the discovery of gravitational waves (often, Nobel Prizes are awarded many years after discoveries), for the three laureates, it actually comes at the culmination of decades of effort. LIGO may have only recently detected gravitational waves, but its journey to doing so began nearly 45 years ago.

The very idea for LIGO came to Rainer Weiss in the early 1970’s when, as associate professor of physics at MIT, he had to find a way to explain gravitational waves (a prediction of general relativity) to his students. In an interview with MIT news writer, Jennifer Chu, Weiss recalled his revelation:

Sometime later, in 1972, Weiss carefully thought through and wrote down his idea, subsequently publishing it as a paper titled, "Electromagnetically Coupled Broadband Gravitational Antenna" . In this paper, Weiss described in great detail, the design and promise of using laser interferometry to detect gravitational waves. Within its 22 pages, the paper laid out the blueprint for the Laser Interferometer Gravitational-Wave Observatory (at the time, Weiss called it an antenna.) 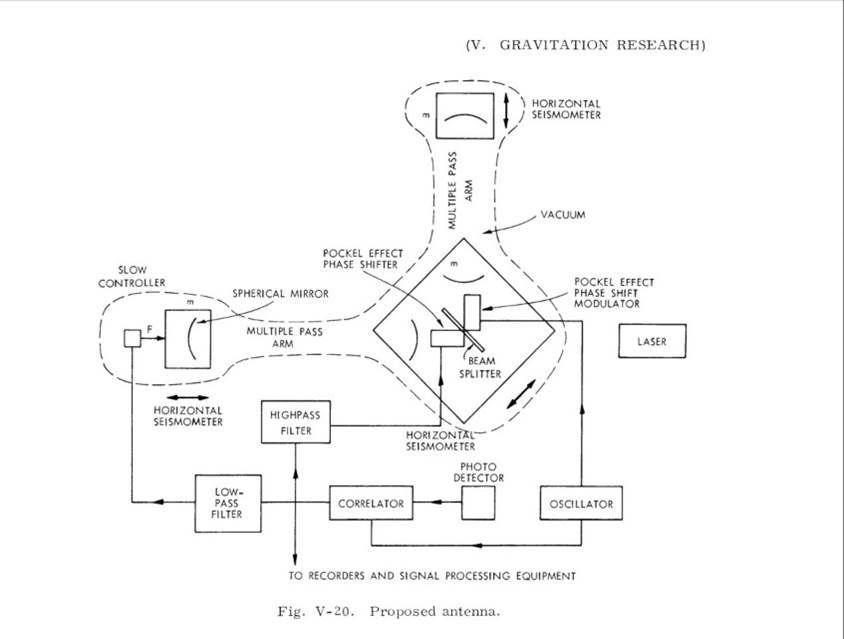 And with that, LIGO was born (at least on paper).

Today, no one disputes the fact that LIGO owes its very existence to Rainer Weiss.

Transforming LIGO from concept to reality, however, would take another 20 years. There is no way that one man, even the enigmatic Rai Weiss, could get LIGO built by himself. So early on in those first two decades of navigating a circuitous path, trying to keep the idea of a radical scientific experiment alive, Rai found an ideal partner. In 1975, a fateful meeting between Weiss and Kip Thorne of Caltech would set into motion the development of one of the most complicated and risky scientific experiments ever conceived. Thorne, already a highly respected, accomplished, and influential theoretical physicist (with expertise in gravitational waves since the late 1960s), commanded a level of respect among peers, colleagues, research groups, and funding agencies that was unequalled. Kip’s contributions in setting the astrophysics goals were central to the design of the Observatories and the first instruments, and his presence lent a high level of validity and credence to the idea.

As much as Rai is responsible for conceiving of LIGO, Kip Thorne is equally responsible for convincing countless others of LIGO’s potential for success. As a result of his interactions with Weiss, Thorne convinced Caltech to create a gravitational-wave research group. The group would be led by Ron Drever, from Glasgow University (Drever, considered a co-founder of LIGO, would go on to co-invent the Pound–Drever–Hall technique for laser stabilization, which was critical to LIGO’s ability to detect gravitational waves). Sadly, Drever passed away earlier this year, but not before he learned of LIGO’s success.

Thus was formed the LIGO triumvirate. With Rai’s vision and original idea, Thorne’s brilliant theoretical physics mind, Drever’s brilliant engineering, and all of their remarkable capacities to champion the effort, nothing would stand in the way of LIGO’s evolution from concept to reality.

In 1989, Weiss and Thorne, along with Ron Drever, Fred Raab, and Robbie Vogt, submitted a proposal for LIGO to the U.S. National Science Foundation (NSF) which has enthusiastically supported this effort from the start. The proposal included Rai’s original design for the instrument, updated to include engineering and technology innovations that had occurred in the intervening 17 years. To their credit, and at great risk, the NSF approved the proposal. In 1994 construction began on the twin LIGO detectors in Hanford, Washington and Livingston, Louisiana.

That’s when Barry Barish joined the trio. Barish became LIGO Principal Investigator in 1994, helping the growing cadre move from a small intensely focused group cooking up basic ideas to a large and broad team that could actually deliver the Observatories and hardware. Barry came with knowledge of how to build a project that would succeed, but more importantly, he came with vision and an incredible ability to strategize and make the science happen. His insights led not only to construction of the Observatories and the initial detectors, but also to the creation of the LIGO Scientific Collaboration and to the successful proposal to build Advanced LIGO—the instrument that would finally make the first detection. Barry was the perfect complement to Kip and Rai to bring LIGO to success.

The Rest (as they say) is History

Another 21 years would pass before the efforts of Rai Weiss, Kip Thorne, and Barry Barish finally paid off. On September 14, 2015, LIGO detected the gossamer flutters of spacetime created by the merging of two massive black holes some 1.3 billion light years away. Nearly half-a-century after its conception, LIGO had fulfilled its destiny.

So, while this Nobel Prize is being awarded barely two years after LIGO’s historic detection, it acknowledges 45 years of effort: from conception, through design, planning, testing and prototyping, through decades of research and engineering, invention and innovation, advances in computing, lasers, and optics, and especially the championing and advocating of three remarkable men: Barry Barish, Kip Thorne, and Rai Weiss. There can be no doubt; their recognition by the Nobel Committee is well earned.

Congratulations to you all!

Watch the recording of MIT's press conference below or at http://webcast.mit.edu/fall2017/nobel/ :