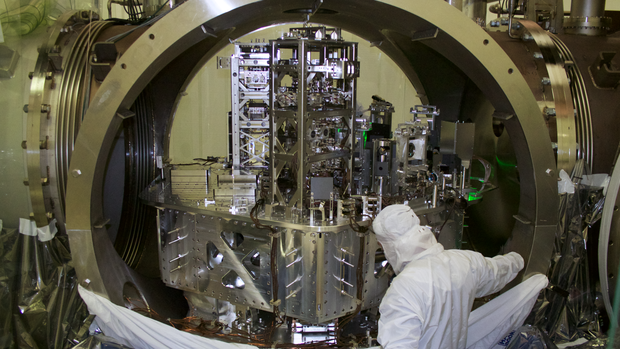 Inside a HAM chamber as Advanced LIGO was being assembled prior to its first observing run in 2015. Credit: Caltech/MIT/LIGO Lab/Greg Grabeel

On October 1st, LIGO’s Hanford (LHO) and Livingston (LLO) detectors will temporarily halt observations to undergo a series of instrument upgrades and fixes. This kind of “commissioning break” sometimes occurs during LIGO’s long observing runs. The current run, O3, began on April 1 2019, when Virgo, the European-based gravitational-wave detector, located at the European Gravitational Observatory (EGO) in Italy, also started observing. Virgo is also pausing this month to perform upgrades that will improve their sensitivity and their uptime. All three detectors will resume operations on November 1st.

Commissioning breaks are typically month-long breaks during observing runs (as opposed to year-or-more long breaks between observing runs) when staff can make upgrades or repairs that would take more time than is available during weekly maintenance windows. The longer break gives the observatory sites an opportunity to make sure they are working optimally for the duration of the observing run, which in this case is scheduled to end on April 30, 2020.

Activities at LIGO Hanford will include replacing 20-year-old vacuum pumps, removing un-used vacuum chambers (to be repurposed later), repairing a vacuum gate-valve, installing a device to determine what species of molecules are being outgassed by parts of the interferometer that operate in-vacuum, replacing a fiber-optic cable in a device the 'squeezes' a vacuum, and installing a wind-fence. LIGO Livingston will be cleaning some critical mirrors (LIGO's precious "end test-masses") and installing some light-absorbing baffles.

All this work is intended to improve LIGO’s ability to detect ever smaller gravitational waves, bringing us closer to our so-called design sensitivity, which is how good we think we can be once all of the original engineering plans for the interferometers are in place (we expect to reach design sensitivity in our fourth observing run in about 2 years). This is especially the case for LIGO’s Hanford detector, which, so far in this observing run, has been less sensitive than Livingston’s. Since April 1st, Livingston has regularly achieved a sensitivity enabling them to potentially detect a binary neutron-star merger as far as about 440 million light-years away, whereas Hanford has been regularly achieving a sensitivity of about 380 million light-years. LHO's upgrades and fixes should close this gap considerably.

Read on for more details about this work.

A month-long break is needed because the work that is planned requires that technical staff enter vacuum chambers, large, steel cylinders that house critical components of the interferometer. Two kinds of vacuum chambers are involved in this commissioning break: HAMs (Horizontal Access Modules) and BSCs (Basic Symmetric Chambers). Opening HAMs and BSCs to allow staff access is a very time-consuming process. 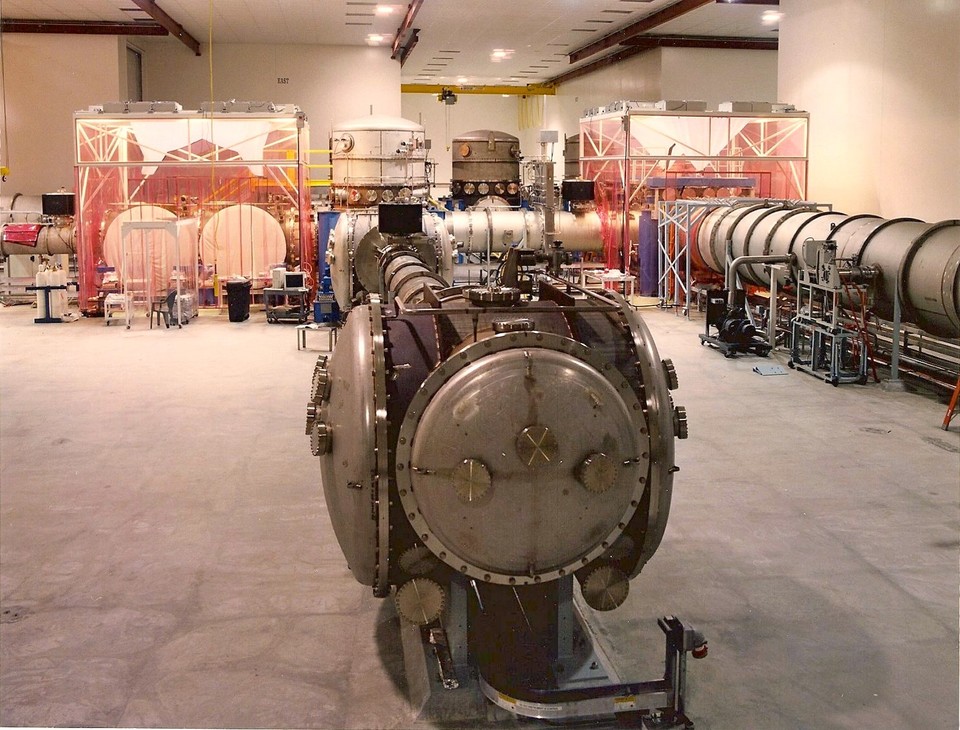 HAM (Horizontal Access Module) chamber, one of many that contain components of LIGO's interferometer within a pristine vacuum. The HAM chamber is approximately 10 ft. wide by 9 ft. tall. Credit: Caltech/MIT/LIGO Lab/Mike Zucker

To give staff access to components needing upgrading or replacing, the interiors of the HAMs and BSCs need to be brought up to ambient air pressure in a process called 'venting'. Before staff can enter a chamber, it first needs to be cut off from the vacuum inside the expansive arms of the interferometer (we never want to let air into the actual arms of the instrument. To find out why, read this.) Air is slowly let into the isolated chamber until the interior air pressure matches the air pressure outside. Only then can the door be opened, thus allowing staff to enter.

Of course, once the work is complete, the air inside needs to be removed again to make a near-perfect vacuum. Evacuating air from a HAM or BSC takes much longer than adding air into a chamber. Venting a single HAM chamber, for example, takes about an hour. Removing the air from that same HAM chamber to a level that matches the vacuum inside the arms will take 10 days! Evacuating a BSC takes even longer. Both of these processes are done slowly to prevent dust that may have settled inside the chamber from being kicked up and landing on any component of the instrument. These processes (venting and evacuating) are the main reasons why this commissioning break is a month long. Janeen Romie, Detector Engineering Group Lead at LIGO Livingston Observatory, explains: 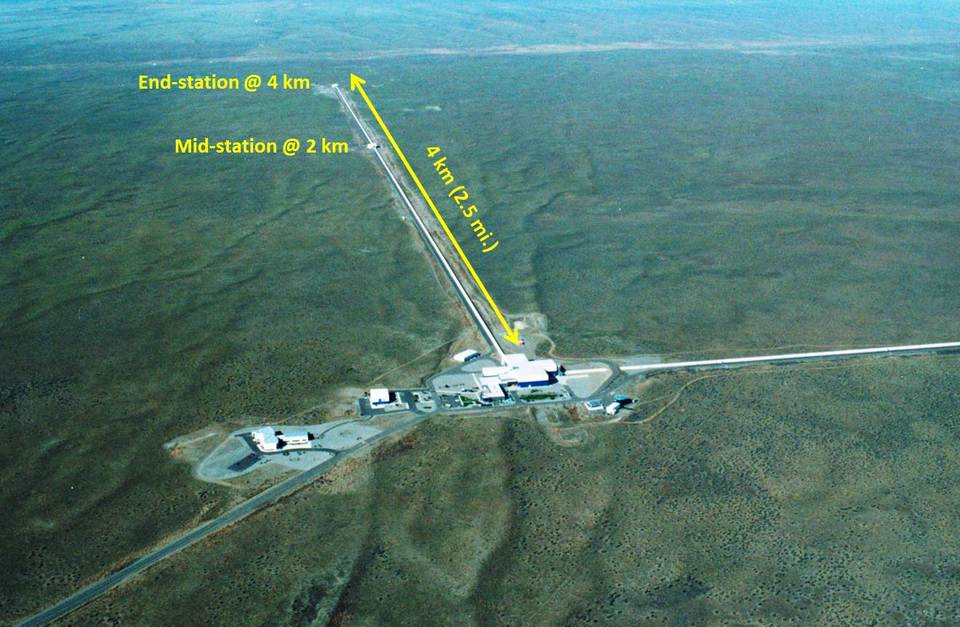 Location of an 'end station' at LHO (click for larger image). A laser, generated in the large white building ("vertex") is split into 2 beams. One travels down the arm to the right, the other down the labeled arm. Mirrors at the end stations reflect the beams back to the vertex where their waves are recombined to generate an interference pattern. Credit: Caltech/MIT/LIGO Lab

“A month sounds like a long time to not be observing, but what it really breaks down to is three days of vacuum preparations, one-and-a-half weeks of in-chamber work, two weeks of pumping down the [BSCs in the] end stations to the ultra-high vacuum state, and a week of commissioning the interferometer to be ready for the November 1st, 10 a.m. resumption of O3”.

The "end stations" Janeen mentions are the buildings at the ends of LIGO's arms (see photo at right). They house the quadruple suspensions that hold the mirrors that reflect the laser beam through the arms.

Lots of work will be done at both LLO and LHO, most of it designed to reduce “noise” that affects our ability to sense gravitational waves. At LIGO, "noise" is any vibration or variation in laser light that is NOT caused by a gravitational wave. Causes of noise include things like earthquakes, nearby traffic, stray photons bouncing around inside the vacuum system, atoms passing through the path of the laser beam, and even wind.

At LIGO Hanford, several projects involving the vacuum system are planned. The first involves replacing a fiber-optic cable attached to a device called a Squeezer that will help improve LIGO's sensitivity. The fiber appears to have degraded and is thought to be adversely affecting LHO’s ability to detect gravitational waves, especially at high frequencies – the kinds of waves that colliding neutron stars emit at the end of their millennia-long orbital dances.

Betsy Weaver, Detector Group Lead at LIGO Hanford Observatory described this task as "very tedious, as we will be working in a [HAM] chamber with many, many small laser and optic components”, she said. 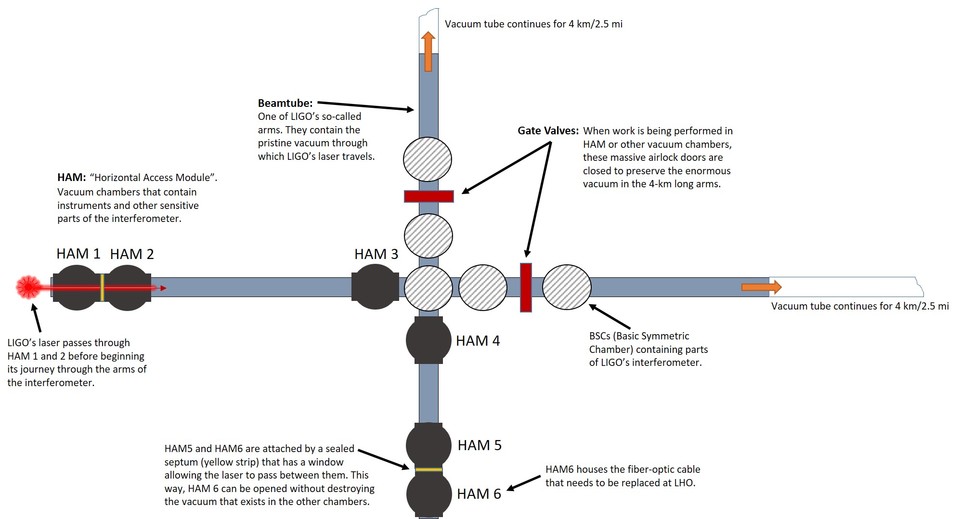 LHO will also be replacing some 20-year-old turbo-molecular pumps. Turbo-molecular pumps are used to reduce the interior pressure of a vacuum chamber from a rough vacuum to a high vacuum. (Achieving the 'ultra-high' vacuum that LIGO operates under requires an additional pump called an ion pump). Replacing these pumps will ensure that LIGO will safely operate a vacuum for at least another 20 years.

Additional work involving the vacuum system includes removing some vacuum chambers that are not in use at the moment, but will be repurposed in an upcoming major upgrade to both LIGO Hanford and Livingston instruments; installing a residual gas analyzer to monitor the kinds of gases emitted by parts of the interferometer that make their way into the vacuum; and repairing a gate valve (massive doors that can be closed to prevent air from entering the arms of the interferometer).

Clearly, LHO's vacuum team has its work cut out for it, as Chandra Romel, LIGO Hanford's Site Vacuum Engineer, explained:

"During a vent activity, vacuum staff are responsible for bringing large volumes, ranging from 10,000 liters to 450,000 liters, up to air via a clean, dry purge air system, followed by chamber door removal for access, and then the subsequent pump-down [to an ultra-high vacuum state]."

Lastly, while the interferometer isn't actively listening for gravitational waves, LHO will be installing a wind-fence at the ends of its arms. Noise from wind at LHO is a common problem. With the observatory situated in a large open shrub-steppe environment, there’s nothing to impede winds that blow across the desert. As it happens, winds in excess of 40 mph can tilt the buildings misaligning the sensitive optics enough that the systems that sense movement in the instrument caused by gravitational waves can get confused. E.g., the wind-tilt can’t be separated from local ground movement. The result is another pesky source of noise that can prevent us from detecting gravitational waves when the winds are blowing. A wind-fence will reduce the amount of tilting and vibrating that the end stations experience during wind events and in so doing, will hopefully increase the time we are able to spend ‘listening’ for gravitational waves, even when it is windy.

Commissioning-break plans for LIGO Livingston (LLO) are a bit different.

First, LLO has a tiny leak in one of its 2.5 mile long arms. Leaks in the vacuum system introduce atmospheric atoms and molecules that can interfere with the laser beam traveling through the arms. LLO's engineers plan to test for the severity of the leak, track down the source, and patch it up. 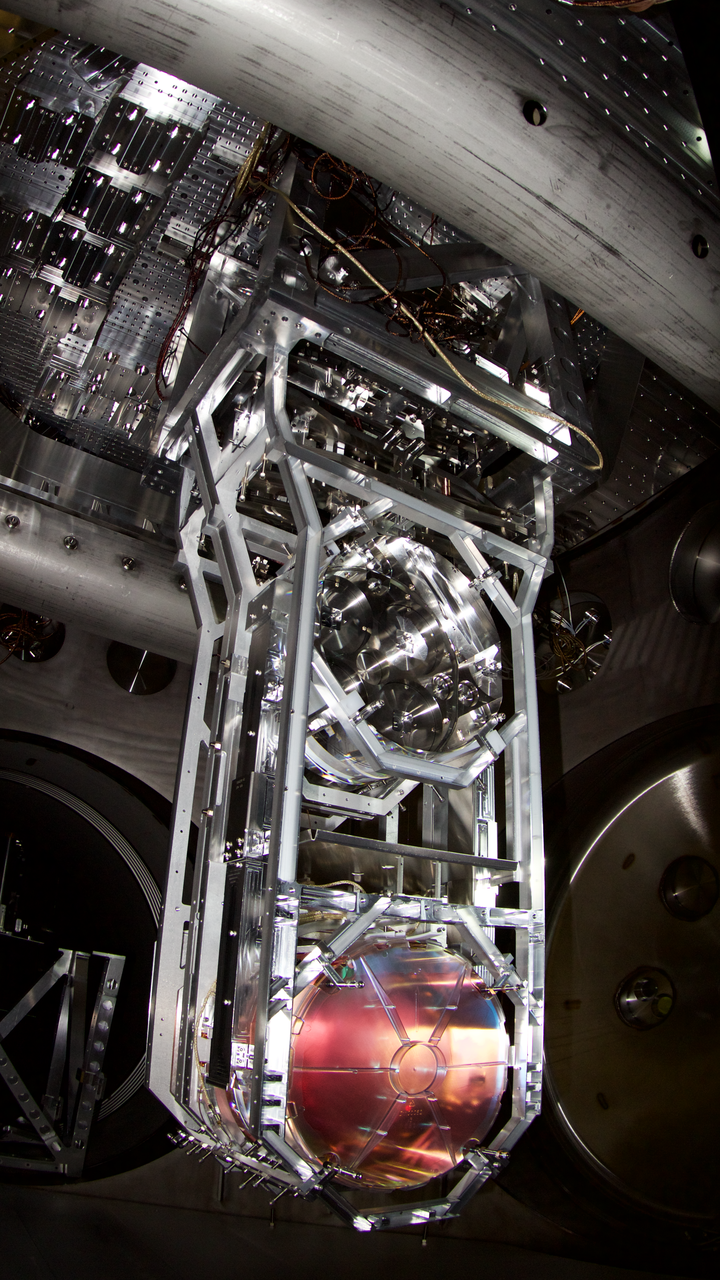 aLIGO quadruple suspension with its test mass mirror shielded to protect it while the chamber is open. This device is located inside a BSC chamber (see picture at left) at the end of the arms of the interferometer. Credit: Caltech/MIT/LIGO Lab/Greg Grabeel

Next, LLO will also be installing light baffles in two different locations. Lots of LIGO’s inner parts have reflective surfaces—metal, glass, etc. Some of those surfaces can reflect or scatter light from the laser beam in different directions, and sometimes back through or into the path of the laser beam itself. Those stray photons can interfere with the main laser beam, thus causing another source of noise in LIGO that can impede our ability to detect gravitational waves. Light baffles trap or absorb scattered light, preventing stray photons from interfering with LIGO’s main laser or sensitive measuring devices. That will help to keep the laser light traveling through the interferometer free of rogue photons messing up our signal. 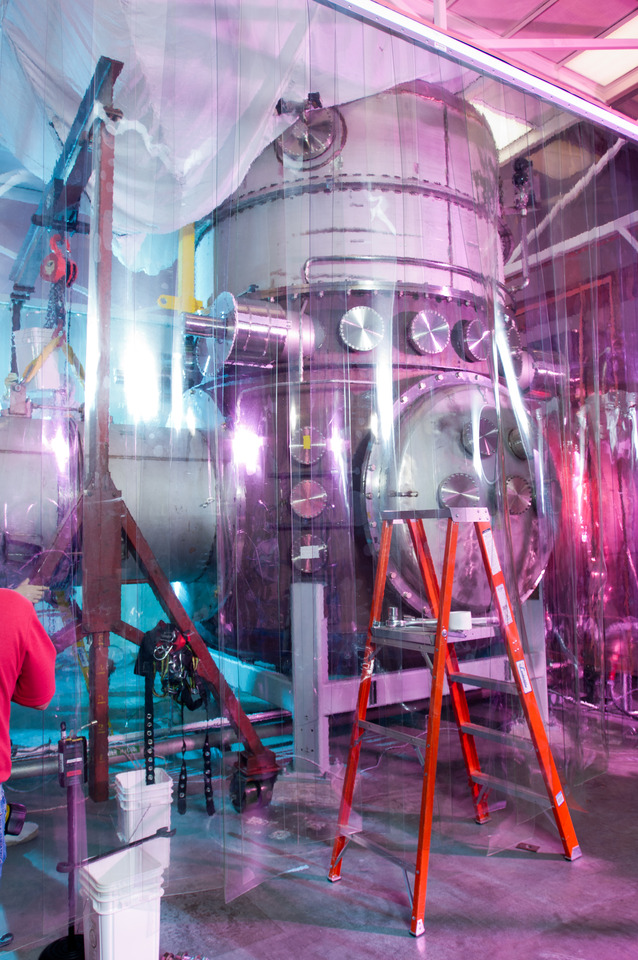 BSC chamber surrounded by a portable clean room. LLO engineers will enter a chamber like this to clean the end test-masses (mirrors). LIGO's quadruple mirror suspensions (picture at right) live in chambers like these. BSC chambers are about 8.7 feet in diameter and 16.7 feet tall. (Credit: Kim Fetrow/Imageworks)

Most critically, LLO will also be inspecting and cleaning the test-masses (mirrors), which reside in the end stations in the large BSC vacuum chambers (see photo at left). Keeping those mirrors clean is critical to LIGO’s functioning. Any loss of laser photons through absorption or scattering due to dust or dirt on the mirror reduces our ability to detect the faintest whispers of passing gravitational waves.

“LLO has the more tedious in-vacuum job coming up, as they will be working in the end-station chambers where the large, fragile, quadruple-pendulum mirror suspensions are", said Betsy Weaver.  "After installing the light baffles, they plan to clean the [end test-mass] mirrors, which hang in these suspensions, in an attempt to reduce absorption [of photons]".

If the mirror absorbs photons, not only does that heat up the mirror causing it to change its shape (which would affect how the laser beam reflects off of it), but it also results in lowering the laser power inside the interferometer. The power of the laser circulating through the instrument is defined by how many photons are traveling up and down the arms; the more power we have, the more sensitive the instrument. Given how small the changes are in the arms that we need to detect, every photon is precious to LIGO. So reducing photon absorption is important to our success.

Since we try not to open the vacuum chambers all that often, this break will provide a great opportunity to get some photos of the guts of LIGO's machine that rarely see the light of day. We hope to post an update or two during the month to share those photos with all of you. Stay tuned!