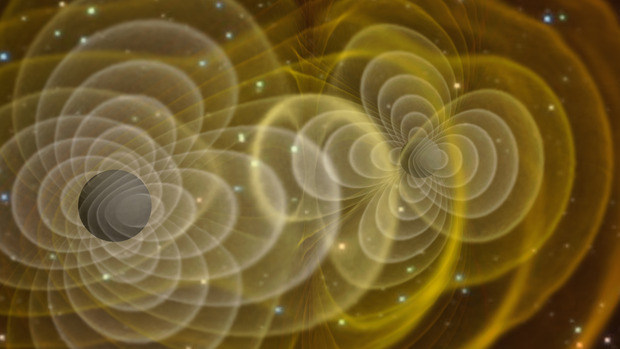 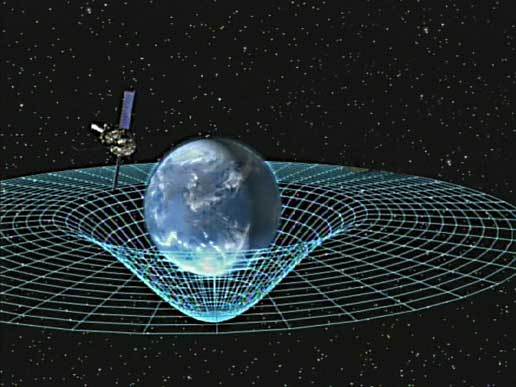 Two-dimensional illustration of how mass in the Universe distorts space-time. [Image Credit: NASA]

Gravitational waves are 'ripples' in space-time caused by some of the most violent and energetic processes in the Universe. Albert Einstein predicted the existence of gravitational waves in 1916 in his general theory of relativity. Einstein's mathematics showed that massive accelerating objects (such as neutron stars or black holes orbiting each other) would disrupt space-time in such a way that 'waves' of changing space-time would propagate in all directions away from the source like waves in water caused by a stone thrown into a pond. These cosmic ripples would travel at the speed of light, carrying with them information about their origins, as well as clues to the nature of gravity itself.

The strongest gravitational waves are produced by cataclysmic events such as colliding black holes, supernovae (massive stars blowing themselves up at the end of their lifetimes), and colliding neutron stars. Other waves are predicted to be caused by the wobbly rotation of neutron stars that are not perfect spheres, and possibly even the remnants of gravitational radiation created by the birth of the Universe itself.

The animation below illustrates how gravitational waves are emitted by two neutron stars as they orbit each other and then coalesce. (Credit: NASA/Goddard Space Flight Center). Note that the gravitational waves themselves are invisible. They are made visible here to illustrate their propagation away from the source.

Though Einstein predicted the existence of gravitational waves (GW) in 1916, the first proof of their existence wouldn't arrive until 1974, 20 years after his death. In that year, two astronomers using the Arecibo Radio Observatory in Puerto Rico discovered a binary pulsar, exactly the type of system that general relativity predicted should radiate gravitational waves. Knowing that this discovery could be used to test Einstein's audacious prediction, astronomers began measuring how the stars' orbits changed over time. After eight years of observations, they determined that the stars were getting closer to each other at precisely the rate predicted by general relativity if they were emitting gravitational waves. For a more detailed discussion of this discovery and work, see Look Deeper. 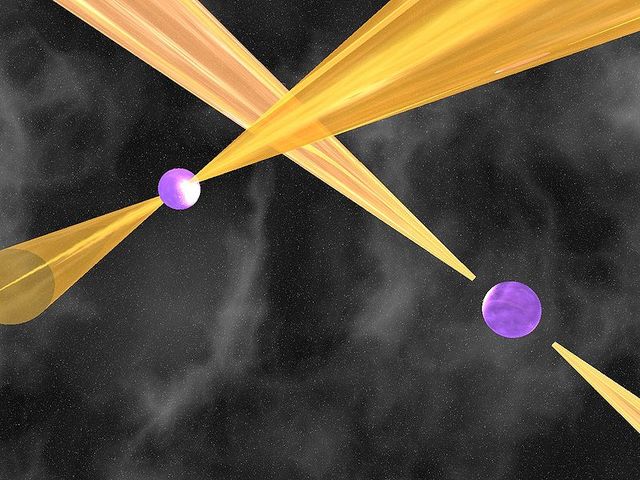 Since then, many astronomers have studied pulsar radio-emissions (pulsars are neutron stars that emit beams of radio waves) and found similar effects, further confirming the existence of gravitational waves. But these confirmations had always come indirectly or mathematically and not through actual 'physical' contact.

All of this changed on September 14, 2015, when LIGO physically felt the distortions in spacetime caused by passing gravitational waves generated by two colliding black holes nearly 1.3 billion light years away. LIGO's discovery will go down in history as one of humanity's greatest scientific achievements.

While the processes that generate gravitational waves can be extremely violent and destructive, by the time the waves reach Earth they are billions of times smaller. In fact, by the time gravitational waves from LIGO's first detection reached us, the amount of space-time wobbling they generated was thousands of times smaller than the nucleus of an atom! Such inconceivably small measurements are what LIGO was designed to make. To find out how LIGO can achieve this task, visit LIGO's Interferometer.