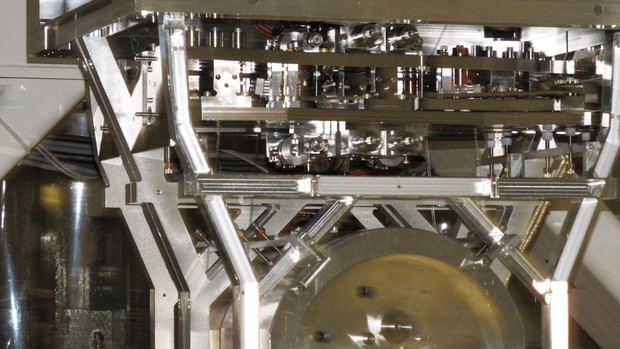 The upper section of one of LIGO's complex suspension systems.

Designing instruments like LIGO's interferometers, capable of measuring a distance on the order of 10-19 meters required inventing and refining innovative technology. Most of LIGO’s most impressive technology resides in its seismic isolation systems (which remove unwanted vibrations), vacuum systems (to make sure the laser light is kept pure), optics components (to preserve laser light and laser power), and computing infrastructure (to handle the mindboggling amount of data that LIGO collects). These systems are like LIGO's internal organs. If any one fails, the whole instrument suffers.

While each of these components is a feat of engineering in itself, without working seamlessly together, LIGO, as a single multifaceted instrument could never achieve its scientific goals. A basic overview of each of LIGO's critical systems is provided below. For a more detailed discussion of these and other LIGO engineering systems, visit Look Deeper.

LIGO’s greatest strength is also its greatest weakness. Since LIGO is designed to sense the smallest conceivable motions of mirrors caused by the passage of a fleeting gravitational wave, it is also extremely sensitive to all vibrations near (such as trucks driving on nearby roads) and far (earthquakes on the other side of the world). Without taking extraordinary measures, any number of Earthly vibrations could move LIGO’s primary mirrors (LIGO scientists call them “test masses”) enough to hide a gravitational wave signal. Isolating LIGO from as much environmental vibration as possible is the linchpin in LIGO’s quest to feel gravitational waves. To that end, LIGO uses multiple means of eliminating vibration falling into two broad categories: “active” and “passive” damping systems. 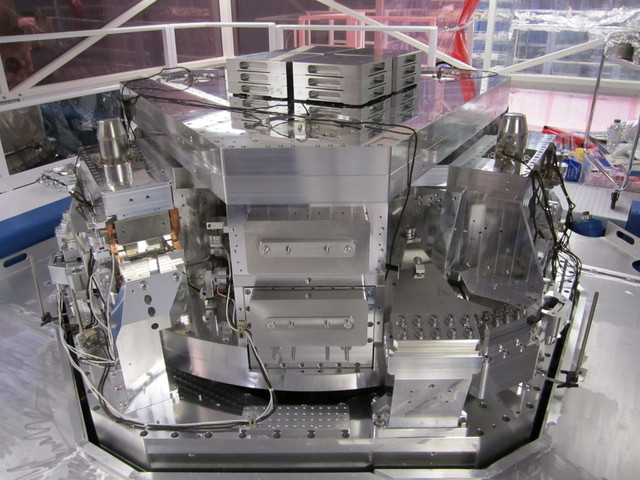 The first line of defense against unwanted vibration is LIGO’s “active” damping system. The Internal Seismic Isolation (ISI) system consists of devices that sense ground movements and then deliberately perform counter movements to eliminate them, keeping the instrument motion-free.

Obviously, the local environment is always creating vibrations of one form or another. LIGO’s ISI system contains sensors designed to feel different frequencies caused by different environmental vibrations. These sensors work side-by side and send their signals to a computer that combines the effects of all of these motions and then generates a net counter-motion to cancel all of the vibrations simultaneously. It is very similar to how noise-canceling headphones work! 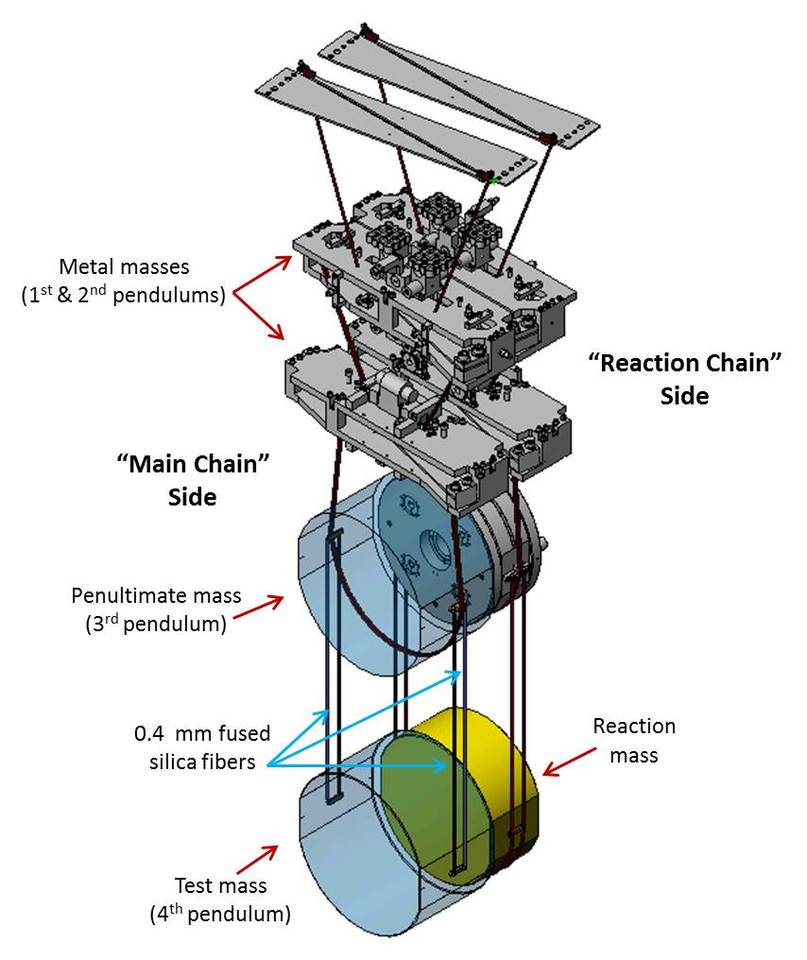 Anatomy of a quad. Four vibration damping masses are present. The top two are flat metal structures below which the cylindrical masses hang from 0.4 mm silica fibers. The bottom two on the Main Chain side are cylindrical and made of a high-quality fused silica glass. (Adapted from IGR, University of Glasgow)

LIGO’s passive damping system holds the all-important mirrors perfectly still through a 4-stage pendulum called a "quad". In the quad, LIGO’s test masses (its mirrors) are suspended at the end of four pendulums by 0.4 mm thick fused-silica (glass) fibers. The "Main Chain" side faces the laser beam, while the "Reaction mass" side helps to keep the test mass steady from noise not associated with sources from space. This configuration absorbs any movement not completely canceled out by the active (ISI) system. The sheer weight of the suspension components (each mirror weighs 40 kg) also helps to prevent motion of the mirrors thanks to the Law of Inertia.

Working together, these active and passive vibration damping systems ensure that LIGO's lasers and mirrors are isolated from as much external noise and vibration as is physically possible.

Operating in a Vacuum

LIGO contains one of the largest and purest sustained vacuums on Earth. In volume, it is surpassed only by the Large Hadron Collider in Switzerland. The atmospheric pressure inside LIGO's vacuum tubes is one-trillionth that of air pressure at sea level. LIGO needs such a good vacuum for two reasons:

1. Air – Even just a few molecules of air can create noise which masks the tiny changes in distance between mirrors we seek to detect. One reason for this is Brownian motion, which is the fact that everything with a temperature above absolute zero is moving with heat energy. Molecules of air hitting the mirrors can cause them to move, thus changing the distance the laser beam travels, which can mimic or mask a change caused by a gravitational wave. Another way air in the light path can cause problems is similar to the shimmering one sees over a hot road. In such a case, air acts like a lens and can change the path the light takes as it passes through it. In LIGO, if the path of the laser changes, so too does the distance the beam travels, which in turn, would cause an interference pattern that could make LIGO's detectors think a gravitational wave passed when one really didn't.

2. The second critical reason for operating in a vacuum is to eliminate the chances that dust will drift into the path of the laser, or worse, onto a mirror. A mote of dust passing through the beam could cause some light to scatter (i.e., be reflected in some random direction away from its path). This scattering could be misinterpreted as a flicker of light caused by a gravitational wave. Worse, if a piece of dust were to land on a mirror in line with the laser beam, it would be incinerated by the laser, and could cause irreversible damage to the mirror, rendering it useless.

So overall, without operating in a high quality vacuum, LIGO’s lasers would be absorbed and deflected enough to create signals that make us think we've detected a gravitational wave when we have not, or could just drown out any incoming actual wave.

Creating such a large volume of empty space on Earth was no easy task. Many techniques were used to remove all the air and other molecules from LIGO’s vacuum tubes:

LIGO's optics system consists of lasers, a series of mirrors, and a photodetector (a device that measures varying light levels). In order to measure a movement thousands of times smaller than a proton, LIGO's optical components must operate harmoniously and with unprecedented precision. It all begins with the main laser.

We all encounter lasers daily in laser pointers, cat toys, or barcode scanners at the grocery store. Because of their omnipresence most of us tend to take them for granted without really knowing how they work. If you're one of those people, you are not alone! If you want to know how they work, Cambridge University’s “Naked Science Scrapbook” video, “How do lasers work?” provides a fun, easy-to-understand explanation. Once you grasp the basic principles, understanding LIGO's laser is a snap!

The first thing to understand is that the word, "laser" is actually an acronym for “Light Amplification by the Stimulated Emission of Radiation”. This means that "laser" refers to a process more than a thing, but most of us now use the term ubiquitously to refer to the device that generates the laser beam, or the beam itself. This might be splitting hairs, but when it comes to understanding LIGO's laser, it's an important distinction.

The heart of LIGO is its 200 Watt laser beam. But the beam doesn't start out at 200 W. It actually takes four steps to amplify its power and refine its wavelength to a level of precision never before seen in a laser of this kind. 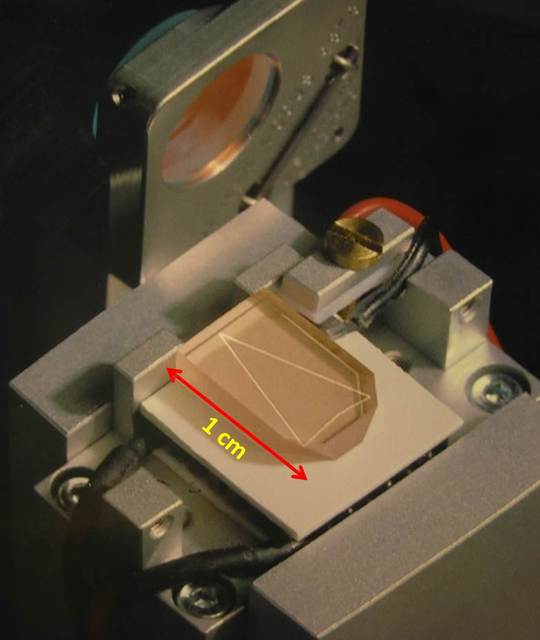 The very first glimmer of light that ultimately becomes LIGO's powerful laser emerges from a laser diode, which uses electricity to generate an 808 nanometer (nm) near-infrared beam of about 4 Watts. This is the same kind of device that a typical laser pointer uses. While 4 W doesn't seem like a lot, the laser in the average laser pointer shines at less than 5 milliwatts. So LIGO's 4 Watt beam is 800 times more powerful than that laser pointer you use to entertain your cat!

The second step in boosting LIGO's laser up to 200 W occurs when the 4 W beam enters a device called a Non-Planar Ring Oscillator (NPRO). The NPRO consists of a remarkably small boat-shaped crystal about the size of a pinky fingernail! The 4 W beam bounces around inside this crystal and stimulates the emission of a 2 W beam with a wavelength of 1064 nm (in the invisible infrared part of the spectrum).

Step three in LIGO's laser amplification occurs when the now 2 W beam enters another amplifying device that boosts the 1064 nm beam from 2 to 35 W. Getting from 35 W to 200 W requires a different kind of device, however. So the 35 W beam is sent through a device called a High Powered Oscillator (HPO), which performs further amplification and refinement, and generates the 200 W beam of pristine "lased" light. This is the beam that ultimately enters LIGO's interferometer.

This multi-stage amplified laser is required for LIGO because of its need to continually produce a pristine single wavelength of light. In fact, LIGO's laser is the most stable ever made to produce light at this wavelength. This stability is one of several factors critical for LIGO's ability to detect gravitational waves. 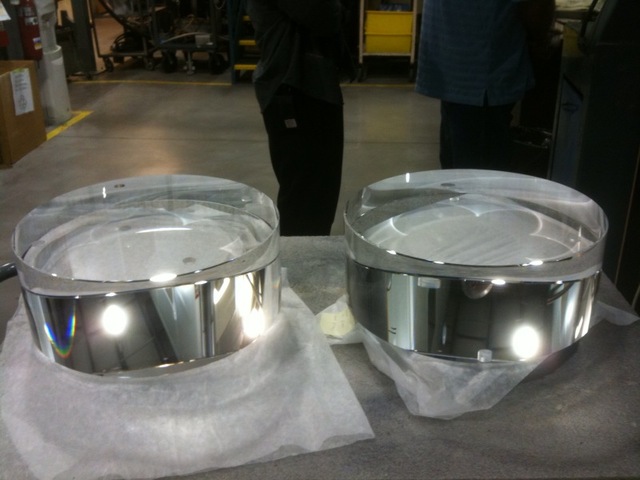 LIGO’s mirrors are the highest quality available, both in material and shape. Made of very pure fused silica glass, they absorb just one in 3-million photons that hit them. This is important because it means that most of the laser light is reflected. Reflecting most of the light means that the mirrors are not prone to heating. Too much heat from the laser could alter the mirror shapes enough that they degrade the quality of the laser light. Any degradation would hamper LIGO's ability to distinguish a gravitational wave from environmental noise. Lastly, the highly reflective surface preserves laser power--again, the more power, the better LIGO's resolution.

The mirrors also refocus the laser, keeping the beam traveling coherently, meaning that it doesn't spread out as it travels throughout its multiple reflections before encountering the photodetector.

Finally, the mirrors were polished so precisely that the difference between the theoretical design (the perfect mirror shape as designed on a computer) and the actual polished mirror surface is measured in atoms! This is critical because, with all the reflections it goes through, each laser in each arm travels about 1120 km before being merged with its partner and reflected one last time to the photodetector. Maintaining the stability and purity of the laser light is one of LIGO's biggest challenges.

Computers are required both to run the LIGO instruments and to process the data that it collects.

When it is in 'observing' mode, LIGO generates terabytes (1000's of gigabytes) of data every day. All of this information must be transferred to a network of supercomputers for storage and archiving. Such supercomputers are located at each of the observatories, at Caltech, at MIT, and at various other institutions. Once the data is secured, scientists can use customized computer programs to scour the data for gravitational waves.

The amount of data LIGO collects is as incomprehensively large as gravitational wave signals are small. LIGO's archive already holds the equivalent over 1-million DVDs of data and will add the equivalent of about 178-thousand DVDs each year to its archive. In actual numerical terms, the data archive at Caltech holds over 4.5 Petabytes (Pb) of data, and will grow at a rate of about 0.8 Pb (800 terabytes) per year. What's a petabyte? If you wanted to count up to a petabyte by counting one byte per second, it would take you 35.7 million years to reach one petabyte!

Storing information is one thing; processing it is another. Processing and analyzing all of LIGO's data requires a vast computing infrastructure. For LIGO's first observing run in 2015, the LIGO Lab will provide 35 MSU (million service units) worth of computing cycles/time. This is equivalent to running a modern 4-core laptop computer for 1,000 years! The amount of computing time is expected to grow by a factor of 10 to around 400 MSU by the time LIGO has completed its third observing run.

If you'd like to learn even more about all of LIGO's remarkable technology and engineering, visit Look Deeper.