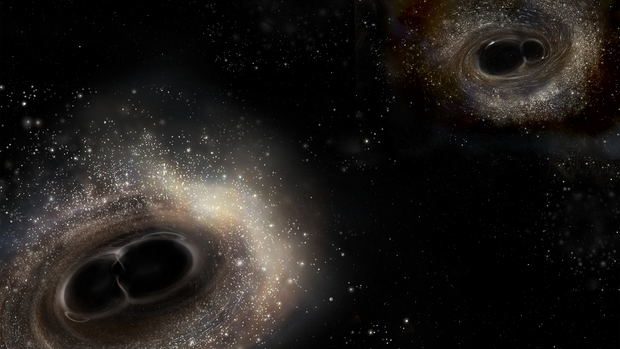 This artist's illustration depicts the merging black hole binary systems for GW150914 (left image) and GW151226 (right image). The black hole pairs are shown together in this illustration, but were actually detected at different times, and on different parts of the sky. The images have been scaled to show the difference in black hole masses. In the GW150914 event, the black holes were 29 and 36 times that of our Sun, while in GW151226, the two black holes weighed in at 14 and 8 solar masses. Image credit: LIGO/A. Simonnet.

The two LIGO gravitational wave detectors in Hanford Washington and Livingston Louisiana have caught a second robust signal from two black holes in their final orbits and then their coalescence into a single black hole. This event, dubbed GW151226, was seen on December 26th at 03:38:53 (in Universal Coordinated Time, also known as Greenwich Mean Time), near the end of LIGO's first observing period ("O1"), and was immediately nicknamed "the Boxing Day event".

Like LIGO's first detection, this event was identified within minutes of the gravitational wave's passing. Subsequent careful studies of the instruments and environments around the observatories showed that the signal seen in the two detectors was truly from distant black holes – some 1.4 billion light years away, coincidentally at about the same distance as the first signal ever detected. The Boxing Day event differed from the LIGO's first gravitational wave observation in some important ways, however.

With these two confirmed detections, along with a third likely detection made in October 2015 (believed also to be caused by a pair of merging black holes--see our paper draft on Black Hole Binaries in O1 for more information) we can now start to estimate the rate of black hole coalescences in the Universe based not on theory, but on real observations. Of course with just a few signals, our estimate has big uncertainties, but our best right now is somewhere between 9 and 240 binary black hole coalescences per cubic Gigaparsec per year, or about one every 10 years in a volume a trillion times the volume of the Milky Way galaxy! Happily, in its first few months of operation, LIGO’s advanced detectors were sensitive enough to probe deeply enough into space to see about one event every two months.

Our next observing interval – Observing Run #2, or "O2" – will start in the Fall of 2016. With improved sensitivity, we expect to see more black hole coalescences, and possibly detect gravitational waves from other sources, like binary neutron-star mergers. We are also looking forward to the Virgo detector joining us later in the O2 run. Virgo will be enormously helpful in locating sources on the sky, collapsing that ring down to a patch, but also helping us understand the sources of gravitational waves.

LIGO releases its data to the public. This open-data policy allows others to analyze our data, thus ensuring that the LIGO and Virgo collaborations did not miss anything in their analyses, and in the hopes that others will find even more interesting events. Our data are shared at the LIGO Open Science Center. GW151226 has its own page there.

We encourage you to wander around the LIGO Laboratory web page where you will find graphics to help you understand the Boxing Day observation, links to the press release, and pointers to scientific papers if you would like to dig in even deeper. There you will also find links to the LIGO Scientific Collaboration website, and to our sister collaboration, Virgo, both of which are central to these scientific results.

Science summary of the GW151226 event, written for general public, at the website of the LIGO Scientific Collaboration.

The "chirp" tones of the two LIGO detections are available for download. Formats are suitable as ringtones for either iPhone or Android devices. (Instructions for installing custom ringtones)

Detection Portal of the first detection of gravitational waves on Sep 14, 2015.