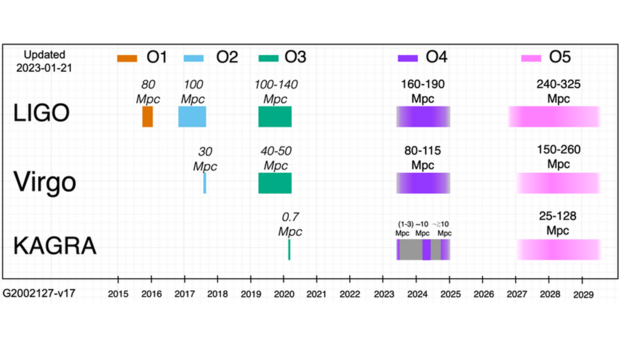 Latest Update on Start of Next Observing Run (O4)

UPDATE: This story was originally published in June, 2022. It has now been updated to reflect the latest expectations for O4, both when it will commence and its duration.

After over two years of upgrades, maintenance work, and construction of a new 'squeezer cavity' at LLO and LHO, LIGO is projecting that its next observing run, O4 (the fourth since the Advanced LIGO instrument came online in 2015) will begin in May 2023.

The long wait to reach O4 will be worth it. LIGO's two detectors in Washington State and Louisiana will be joined by Virgo in Italy and KAGRA in Japan. Virgo has observed alongside LIGO in the past, and was instrumental in localizing the source of the binary neutron star merger in 2017. KAGRA technically joined the LIGO-Virgo network in 2020, but the abrupt end to O3 in March of that year meant that it was not actively observing with LIGO and Virgo for very long.

These latest major upgrades to LIGO and Virgo instruments in particular will result in more sensitive detectors, capable of sensing even ‘fainter’ gravitational waves than before—which also means detecting more events than ever before. LIGO projects a sensitivity goal of 160-190 megaparsecs (Mpc) for binary neutron star mergers (that’s how far away LIGO can expect to detect two neutron stars colliding). Virgo projects a target sensitivity of 80-115 Mpc. KAGRA, which employs some unique forward-looking but challenging detection technology, should be running with greater than 1 Mpc sensitivity at the beginning of O4, and will work to improve its sensitivity toward the end of O4. Of course, more violent or larger events, such as black hole collisions, are detectable from much deeper reaches of the Universe, but we use the distance at which we can detect neutron star mergers as a means to describe our sensitivity to all gravitational waves.

LIGO, Virgo, and KAGRA are closely coordinating to start O4 together. One month prior to beginning O4, all sites will engage in a collaborative engineering run to test the upgraded instruments in real time, and test systems required for observing together. There’s always a chance that a detection will be made during an engineering run, so if any candidate events occur, they may be released to the scientific community and studied further. (In fact, LIGO’s very first detection in September 2015 came during an engineering run.)

O4 will comprise 18 months of active observing time. The official end of the run will likely extend into 2025, however, to make up for planned, short commissioning breaks taking place during the run. The extended run time will also accommodate additional time for the O5 test mass optical coating R&D program to mature and at the same time increase the scientific output of O4.

Everyone at LIGO, Virgo and KAGRA is eager to start detecting gravitational waves once again and sharing our discoveries with the world.