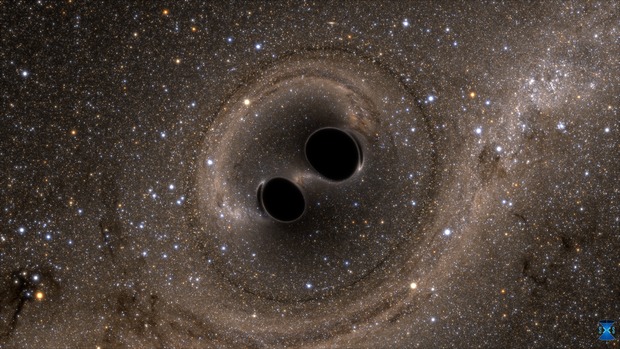 Two Black Holes Merge into One

The collision of two black holes holes—a tremendously powerful event detected for the first time ever by the Laser Interferometer Gravitational-Wave Observatory, or LIGO—is seen in this still from a computer simulation. LIGO detected gravitational waves, or ripples in space and time generated as the black holes spiraled in toward each other, collided, and merged. This simulation shows how the merger would appear to our eyes if we could somehow travel in a spaceship for a closer look. It was created by solving equations from Albert Einstein's general theory of relativity using the LIGO data.

The two merging black holes are each roughly 30 times the mass of the sun, with one slightly larger than the other. The event took place 1.3 billion years ago.