The general locations of the LIGO Hanford and LIGO Livingston interferometers. (Caltech/MIT/LIGO Lab)

The LIGO “observatory” is made up of two identical and widely separated interferometers situated in sparsely populated, out-of-the-way places: LIGO Hanford in southeastern Washington State in an arid shrub-steppe region crisscrossed by hundreds of layers of ancient lava flows; and LIGO Livingston, 3002 km away in a vast, humid, loblolly pine forest east of Baton Rouge, Louisiana.

LIGO was designed with two detectors so far apart for good reason. LIGO’s detectors are so sensitive that they can 'feel' the tiniest vibrations on the Earth from sources very nearby to sources hundreds or thousands of miles away. Things like earthquakes, acoustic noise (e.g., trucks driving on nearby roads, farmers plowing fields, things that people can hear and feel), and even internal laser fluctuations can cause disturbances that can mask or mimic a gravitational wave signal in each interferometer. If the instruments were located close together, they would detect the same vibrations at the same times--both from Earth-sources and from gravitational waves and it would be nearly impossible to distinguish a vibration from a gravitational wave from the local noise.

Facilities located far apart, however, will not feel the same local vibrations but they will feel a gravitational wave vibration at (virtually) the same time. By comparing data from both sites, scientists can ignore the vibrations that differ between the sites and look only for identical signals that occurred at the same time at both locations. This is why two or more detectors are essential. One acts as a noise filter for the other, leaving only signals from gravitational waves as the stand-outs. Without working together in this way to confirm each other's detections, gravitational waves could never be positively detected with an interferometer like LIGO. LIGO’s collaboration with VIRGO adds a third interferometer to the mix thus significantly increasing the confidence that a detected signal is real.

The size of the interferometers (with arms 4 km (2.5 mi.) long) and LIGO's sensitivity to vibration presented significant challenges to LIGO designers when selecting an appropriate site for the instruments. For one, there are few places left where such a large portion of land can be dedicated to a massive science experiment requiring a lot of empty space around it and yet have access to the infrastructure it requires to run it. And secondly, just as astronomical telescopes are built far from city lights that pollute the night sky with an obscuring fog ("light pollution"), gravitational-wave observatories need to be isolated from the vibrations of human activity. Such vibrations can drown out the telltale signals of gravitational waves in a sea of noise, just as light pollution drowns out the fragile light of distant stars. In the end, the desert of eastern Washington, and the forests of Louisiana were chosen as the locations of LIGO's two detectors. 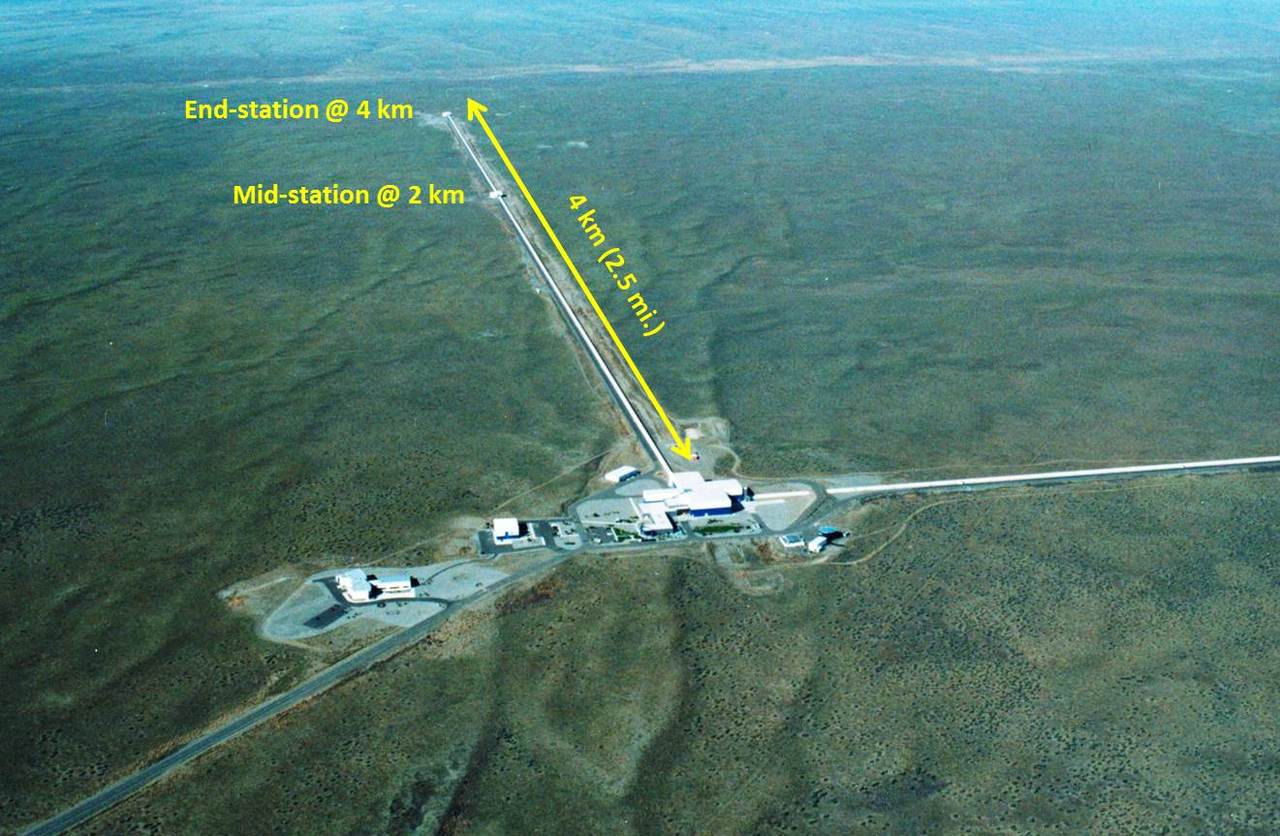 Fitting a LIGO interferometer in one frame is extremely difficult because of the size of the instrument. In this photo, all of LIGO Hanford's Y-arm is seen stretching off into the desert, but less than half of the X-arm fits into the photo. The mid- and end-stations are labeled, but the arm is so long that the perspective of the shot distorts the distance between them. (Caltech/MIT/LIGO Lab)