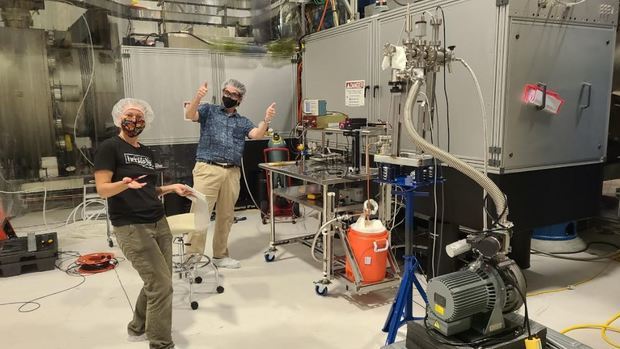 LIGO Hanford engineers, Chandra Romel and Daniel Sigg prepare LHO's “test mass discharge system” (TMDS). It is believed that an earthquake in Idaho in March caused the mirrors ("test masses") to rub against the earthquake stops, building enough charge to negatively impact the interferometer's range. The TMDS will remove the charge.

After 4 months of quiet, with only skeleton crews onsite, the LIGO observatories in Washington and Louisiana are now allowing more staff to return to get the instruments up and running again and to prepare for previously planned upgrades. After the COVID-19 outbreak forced an early end to LIGO’s third observing run (O3) on March 27th, the interferometers were powered off and staff were required to work from home to stay safe and prevent any potential spread of the virus. In this time, about three staff members were on site at any given time, compared to the 40 or so who typically occupy each observatory.

Months sitting idle can wreak havoc on complex devices like LIGO’s interferometers, so as soon as circumstances allowed, and after some very careful consideration, plans, and mitigations by LIGO management, some staff were allowed to return to see how the instruments were faring. Livingston began letting some staff back on site on July 6, as civil authorities in Louisiana had by then declared a statewide “Phase Two,” which enabled increased activity at LLO. Within days of returning to the site, LLO staff successfully repowered and locked the interferometer, reporting that everything was in good working order.

Hanford was unable to follow suit at that time due to rising numbers of COVID-19 cases in eastern Washington State. However, conditions have subsequently improved enough in WA that a limited number of Hanford staff and engineers began returning to the site as of July 27. Within days, they too had powered-up and locked the interferometer.

Extra work was required at LHO because it is believed that the magnitude 6.5 earthquake in Idaho on March 31 caused the mirrors ("test masses") to rub against their earthquake stops, building up an electrostatic charge that can adversely impact the interferometer's range. At the end of O3, LIGO's range to detect colliding neutron stars was about 120 Megaparsecs (Mpc), or about 390 million light years. But when LHO engineers returned to the site in late July/early August, the instrument was reaching just 100 Mpc (~326 million light years). To rid the test masses of the charge, LHO engineers utilized a device called a “test mass discharge system” (TMDS). The TMDS works by ionizing ultra-clean air through an ionizer that connects to the vacuum chamber containing the affected mirror, and spraying the air in-vacuum to neutralize the electrostatic charge. Subsequently, the air is pumped back out of the vacuum chamber.

LHO has now performed this exercise on all four test-masses and will hand the machine over to the commissioning team later this week so they can measure the success of the operation. Success will mean recovering a range of 120 Mpc. That will be a sign that we can start the planned upgrade work at LHO.

Work continues at both sites with a multitude of activities, large and small, that will update the instrumentation with new hardware and software, maintain the vacuum equipment, and carry out deferred long-term maintenance on site buildings and mechanical systems. Staff who are able to work from home are continuing to do so.

“Both sites are in triaged detector operations and maintenance, meaning, we are doing some but not all of our science mission, and those activities must be carefully vetted with COVID and the need to avoid staff 'collisions' in mind.”

Furthermore, all on-site education and public outreach activities are canceled for the remainder of the calendar year.

Permanent staff and any visiting contractors at both sites are following strict CDC guidelines to self-report health-statuses, wear approved and fitted masks, interact minimally with others, limit numbers of people in any room at any time, and maintain social distancing. These efforts are being aided by new hardware that has now been installed at both sites such as touchless faucets, foot-pulls on doors, HEPA air-scrubbers, and extra hand-washing stations to ensure staff-safety upon their return.

Getting back to the site has been a relief to many, as LIGO has plans for significant upgrades before its next observing run (O4) begins in 2022. Most significantly, as long as conditions continue to improve, both sites will soon become construction zones while we install a new segment of vacuum tube and its associated concrete enclosures as part of LIGO’s next major upgrade called “A+”, for “Advanced LIGO Plus”. Other less visible but critical improvements will also be made to both instruments, such as new mirrors and upgraded electronics. In addition, LIGO Hanford will be building a dedicated public education/visitor center called the LIGO Exploration Center (LExC), scheduled to open in Jan 2022 if all goes as planned.

Rest assured, LIGO is continuing its mission and is eager to complete upgrade work as long as it is safe for staff to do so. We look forward to sharing more new and exciting findings once O4 begins.