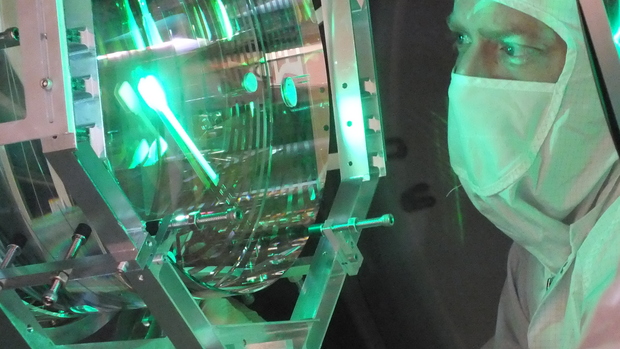 A LIGO staff member inspecting one of the Advanced LIGO Test Mass optics, installed in its suspension frame. The 40kg glass (fused silica) optic interacts with the laser light in the interferometer, moving under the light pressure and in the process modulating its phase. This human scale object is exquisitely isolated from external forces so that its position as tickled by quantum vacuum fluctuations could be seen. Manipulating the Heisenberg Uncertainty Principle resulted in quantum correlations between the mirror position and the phase of the light, enabling a measurement of position smaller than the Standard Quantum Limit. Credit: Caltech/MIT/LIGO Lab.

Quantum fluctuations can jiggle objects on the human scale

The universe, as seen through the lens of quantum mechanics, is a noisy, crackling space where particles blink constantly in and out of existence, creating a layer of background quantum noise whose effects are normally far too subtle to detect in everyday objects.

Now for the first time, a team led by researchers at MIT LIGO Laboratory has measured the effects of quantum fluctuations on objects at the human scale. In a paper published today in Nature, the researchers report observing that quantum fluctuations, tiny as they may be, can nonetheless “kick” an object as large 40-kilogram mirrors of the Laser Interferometer Gravitational-wave Observatory (LIGO), causing them to move by a tiny degree, which the team was able to measure.

It turns out the quantum noise in LIGO’s detectors is enough to move the large mirrors by 10-20 meters — a displacement that was predicted for an object of this size by quantum mechanics, but had never before been measured.

The researchers used a special instrument that they designed, called a quantum squeezer, to “manipulate the detector’s quantum noise and reduce its kicks to the mirrors, in a way that could ultimately improve LIGO’s sensitivity in detecting gravitational waves,” explains Haocun Yu, a physics graduate student at MIT.

“What’s special about this experiment is we’ve seen quantum effects on something as large as a human,” says Nergis Mavalvala, the Marble Professor and associate head of physics at MIT. “We too, every nanosecond of our existence, are being kicked around, buffeted by these quantum fluctuations. It’s just that the jitter of our existence, our thermal energy, is too large for these quantum vacuum fluctuations to affect our motion measurably. With LIGO’s mirrors, we’ve done all this work to isolate them so that they are now sensitive enough to be kicked around by quantum fluctuations, and this spooky popcorn of the universe.”

Yu, Mavalvala, and McCuller are co-authors of the new paper, along with graduate student Maggie Tse and Principal Research Scientist Lisa Barsotti at MIT, along with other members of the LIGO Scientific Collaboration.

LIGO is designed to detect gravitational waves arriving at the Earth from cataclysmic sources millions to billions of light years away. It comprises two twin detectors, one at Hanford, Washington, and the other at Livingston, Louisiana. Each detector is an L-shaped interferometer made up of two four-kilometer-long tunnels, at the end of which hangs a 40-kilogram mirror.

Much has been done to shield the interferometers from external noise, so that the detectors have a better chance of picking out the exceedingly subtle disturbances created by an incoming gravitational wave.

Mavalvala and her colleagues wondered whether LIGO might also be sensitive enough that the instrument might even feel subtler effects, such as quantum fluctuations within the interferometer itself, and specifically, quantum noise generated among the photons in LIGO’s laser.

“This quantum fluctuation in the laser’s light can cause a radiation pressure that can actually kick an object,” McCuller adds. “The object in our case is a 40-kilogram mirror, which is a billion times heavier than the nanoscale objects that other groups have measured this quantum effect in.”

To see whether they could measure the motion of LIGO’s massive mirrors in response to tiny quantum fluctuations, the team used an instrument they recently built as an add-on to the interferometers, which they call a "quantum squeezer." With the squeezer, scientists can tune the properties of the quantum noise within LIGO's interferometer.

The team first measured the total noise within LIGO’s interferometers, including the background quantum noise, as well as “classical” noise, or disturbances generated from normal, everyday vibrations. They then turned the squeezer on, and set it to a specific state that altered the properties of quantum noise specifically. They were able to then subtract the classical noise, to isolate the purely quantum noise in the interferometer. As the detector constantly monitors the displacement of the mirrors to any incoming noise, the researchers were able to observe that the quantum noise alone was enough to displace the mirrors, by 10-20 meter.

Mavalvala notes that the measurement lines up exactly with what quantum mechanics predicts. “But still it’s remarkable to see it be confirmed in something so big,” she says.

Going a step further, the team wondered whether they could manipulate the quantum squeezer to reduce the quantum noise within the interferometer. The squeezer is designed such that when it set to a particular state, it “squeezes” certain properties of the quantum noise, in this case, phase and amplitude. Phase fluctuations can be thought of as arising from the quantum uncertainty in the light's travel time, while amplitude fluctuations impart quantum kicks to the mirror surface.

“We think of the quantum noise as distributed along different axes, and we try to reduce the noise in some specific aspect,” Yu says.

When the squeezer is set to a certain state, it can for example squeeze, or narrow the uncertainty in phase, while simultaneously distending, or increasing the uncertainty in amplitude. Squeezing the quantum noise at different angles would produce different ratios of phase and amplitude within LIGO’s detectors.

The group wondered whether changing the angle of this squeezing would create quantum correlations between LIGO’s lasers and its mirrors, in a way that they could also measure. Testing their idea, the team set the squeezer to 12 different angles, and found that indeed, they could measure correlations between the various degrees of quantum noise in the laser, and the motion of the mirrors.

Through these quantum correlations, the team was able to squeeze the quantum noise, and the resulting mirror displacement, down to 70 percent its normal level. This measurement, incidentally, is below what’s called the standard quantum limit, which, in quantum mechanics, states that a given number of photons, or, in LIGO’s case, a certain level of laser power, is expected to generate a certain minimum of quantum fluctuations that would generate a specific “kick” to any object in their path.

By using squeezed light to reduce the quantum noise in the LIGO measurement, the team has made a measurement more precise than the standard quantum limit, reducing that noise in a way that will ultimately help LIGO to detect fainter, more distant sources of gravitational waves.

This research was funded, in part, by the National Science Foundation.