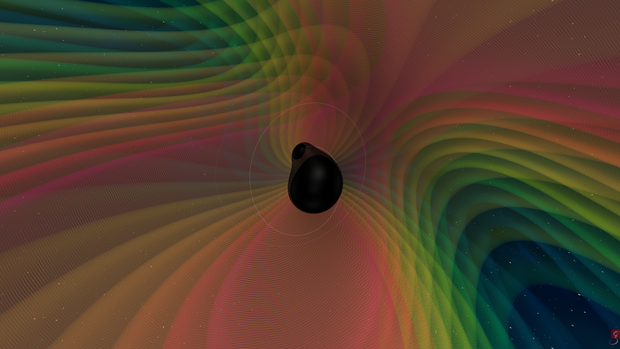 GW190412: The Merger of Two Black Holes with Unequal Masses 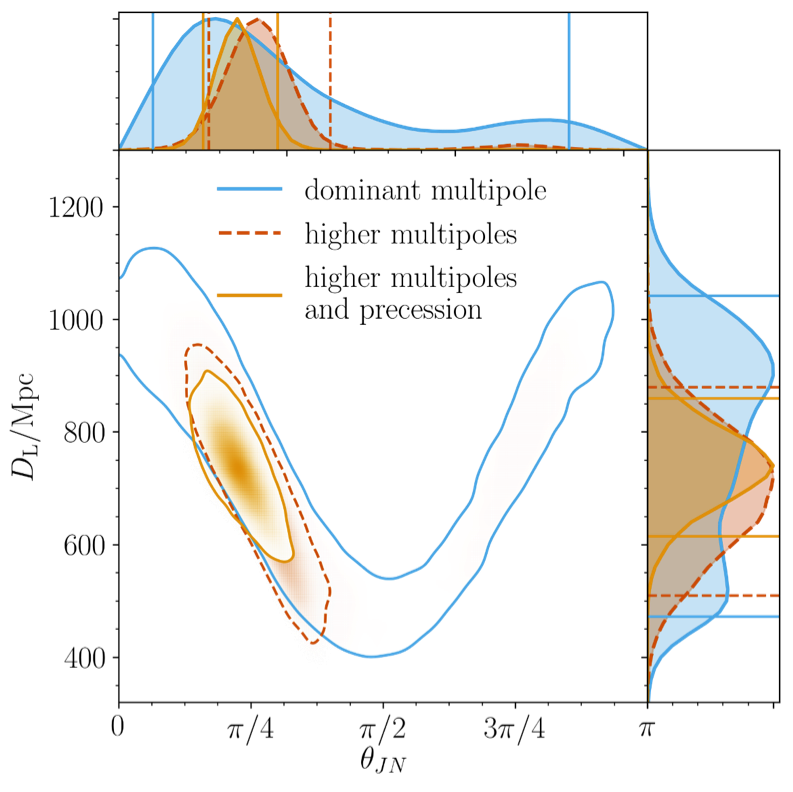 The distance inferred for the source of GW190412 versus the inclination-angle of the binary’s orbit with respect to the line of sight. In general, these two quantities are highly entangled, but the different masses of the BH in the binary allow us to partially disentangle them. The distance is most likely 700 Megaparsecs (Mpc), or roughly 2.3 billion light-years.

The third observing run (O3) of LIGO and Virgo is offering new insights into the late inspiral and merger phase of binary black hole (BBH) systems. The first gravitational-wave event detected back in 2015, GW150914, originated from a binary black hole merger, and since then this class of events has become the most prominent. However, nearly all the systems observed so far have comprised black holes of nearly equal masses. This trend was broken by the observation of the merger of a never-before-seen BBH system on April 12, 2019 at 05:30:44 UTC, just a couple of weeks after the start of O3. The signal, named GW190412, was detected by the Advanced Virgo and the two Advanced LIGO detectors, and it was produced by a coalescing BBH system with markedly unequal masses, one of the black holes being about 3.75 times heavier than the other. Analysis indicates that the black holes that merged had masses equal to 30 and 8 times the mass of the sun. Such mass differences are predicted by theory to produce subtle differences in the gravitational-wave signal. These variations, which appear as higher “harmonics” in the waveform, have been observed for the first time in this event.

Overall, the characteristics of GW190412 also depend on other parameters of the binary system. For example, the observed higher harmonics enable us to constrain the inclination of the plane of the orbit of the BBH system with respect to the line of sight and better measure the distance of the source, since these two quantities are otherwise highly entangled. Furthermore, the measurement of these harmonics in GW190412, as predicted by Einstein’s theory of general relativity, provides yet another confirmation of the validity of that theory.

"Every observing run of Advanced LIGO and Virgo has so far given us new insights into our universe and the third observing run is no exception,” says Frank Ohme, LIGO scientist and Research Group Leader at the Max Planck Institute for Gravitational Physics in Hannover, Germany. “We had detected several binary black hole mergers before, but never one where the bigger black hole is nearly four times more massive than its companion. This gave us, for the first time, the opportunity to use higher harmonics in the signal to understand the source much better and test the theory of general relativity in a new regime. It’s clear we are just beginning to understand the diversity of black hole binaries out there, and I am excited to decipher the universe's secrets every day a little more."