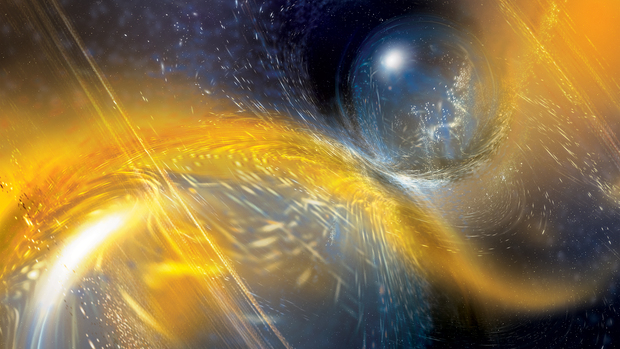 On April 25, 2019, the LIGO Livingston Observatory picked up what appeared to be gravitational ripples from a collision of two neutron stars. LIGO Livingston is part of a gravitational-wave network that includes LIGO (the Laser Interferometer Gravitational-wave Observatory), funded by the National Science Foundation (NSF), and the European Virgo detector. Now, a new study confirms that this event was indeed likely the result of a merger of two neutron stars. This would be only the second time this type of event has ever been observed in gravitational waves.

The first such observation, which took place in August of 2017, made history for being the first time that both gravitational waves and light were detected from the same cosmic event. The April 25 merger, by contrast, did not result in any light being detected. However, through an analysis of the gravitational-wave data alone, researchers have learned that the collision produced an object with an unusually high mass.

"From conventional observations with light, we already knew of 17 binary neutron star systems in our own galaxy and we have estimated the masses of these stars," says Ben Farr, a LIGO team member based at the University of Oregon. "What's surprising is that the combined mass of this binary is much higher than what was expected."

"We have detected a second event consistent with a binary neutron star system and this is an important confirmation of the August 2017 event that marked an exciting new beginning for multi-messenger astronomy two years ago," says Jo van den Brand, Virgo Spokesperson and professor at Maastricht University, and Nikhef and VU University Amsterdam in the Netherlands. Multi-messenger astronomy occurs when different types of signals are witnessed simultaneously, such as those based on gravitational waves and light.

The study, submitted to The Astrophysical Journal Letters, is authored by an international team comprised of the LIGO Scientific Collaboration and the Virgo Collaboration, the latter of which is associated with the Virgo gravitational-wave detector in Italy. The results were presented at a press briefing today, January 6, at the 235th meeting of the American Astronomical Society in Honolulu, Hawaii.

Neutron stars are the remnants of dying stars that undergo catastrophic explosions as they collapse at the end of their lives. When two neutron stars spiral together, they undergo a violent merger that sends gravitational shudders through the fabric of space and time.

LIGO became the first observatory to directly detect gravitational waves in 2015; in that instance, the waves were generated by the fierce collision of two black holes. Since then, LIGO and Virgo have registered dozens of additional candidate black hole mergers.

The August 2017 neutron star merger was witnessed by both LIGO detectors, one in Livingston, Louisiana, and one in Hanford, Washington, together with a host of light-based telescopes around the world (neutron star collisions produce light, while black hole collisions are generally thought not to do so). This merger was not clearly visible in the Virgo data, but that fact provided key information that ultimately pinpointed the event’s location in the sky. 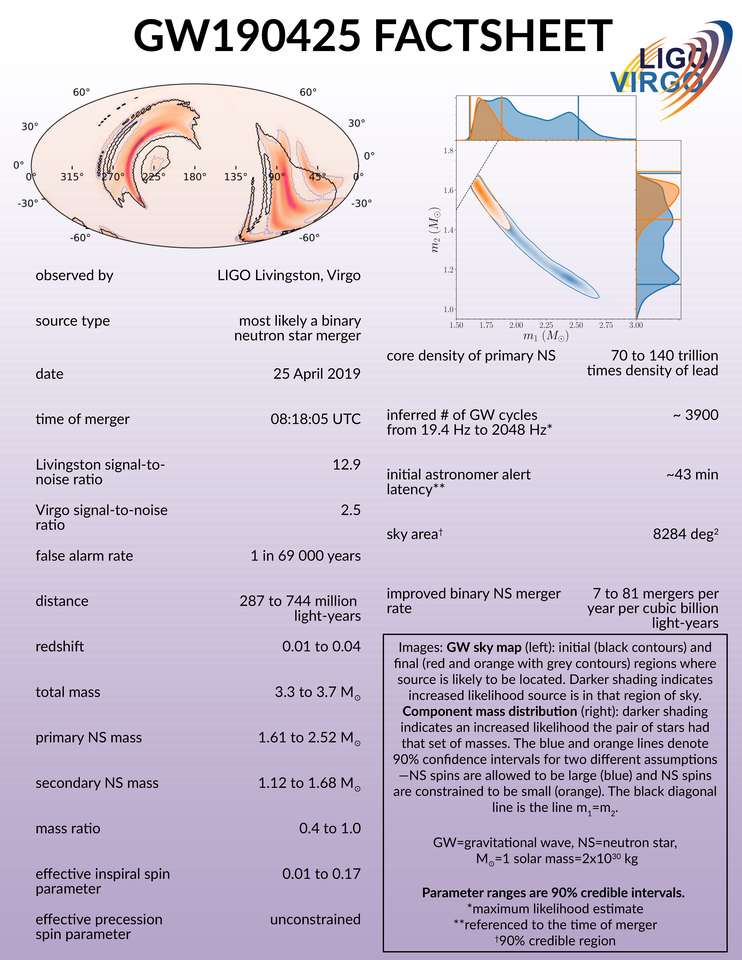 A summary of properties of the binary neutron star merger detected by LIGO and Virgo on April 25, 2019, named GW190425. Credit: LIGO Scientific Collaboration.

The April 2019 event was first identified in data from the LIGO Livingston detector alone. The LIGO Hanford detector was temporarily offline at the time, and, at a distance of more than 500 million light-years, the event was too faint to be visible in Virgo's data. Using the Livingston data, combined with information derived from Virgo’s data, the team narrowed the location of the event to a patch of sky more than 8,200 square degrees in size, or about 20 percent of the sky. For comparison, the August 2017 event was narrowed to a region of just 16 square degrees, or 0.04 percent of the sky.

"This is our first published event for a single-observatory detection," says Caltech's Anamaria Effler, a scientist who works at LIGO Livingston. "But Virgo made a valuable contribution. We used information about its non-detection to tell us roughly where the signal must have originated from."

"What we know from the data are the masses, and the individual masses most likely correspond to neutron stars. However, as a binary neutron star system, the total mass is much higher than any of the other known galactic neutron star binaries," says Surabhi Sachdev, a LIGO team member based at Penn State. "And this could have interesting implications for how the pair originally formed."

Neutron star pairs are thought to form in two possible ways. They might form from binary systems of massive stars that each end their lives as neutron stars, or they might arise when two separately formed neutron stars come together within a dense stellar environment. The LIGO data for the April 25 event do not indicate which of these scenarios is more likely, but they do suggest that more data and new models are needed to explain the merger’s unexpectedly high mass.