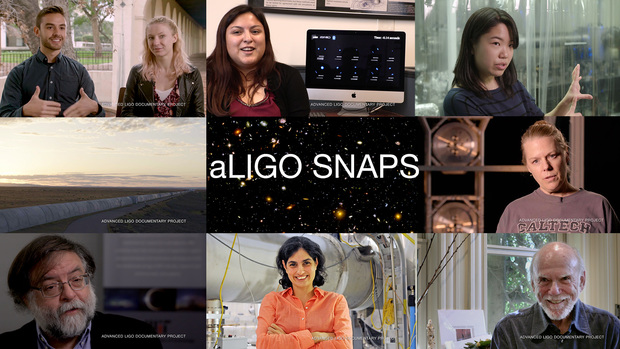 A still image from Episode 9 of the multi-part series "LIGO: A Discovery that Shook the World." Image courtesy of Les Guthman/Advanced LIGO Documentary Project.

The 9th Episode of the Advanced LIGO Documentary Project Released

The 9th episode of Les Guthman's documentary "LIGO: A Discovery that Shook the World", has been released.

This episode, titled "aLIGO SNAPS", brings together into one episode all eight of the aLIGO SNAPS -- the short profiles that conclude each episode. The SNAPS are: "Max Isi and Sarah Gossan," "Teresita Ramirez," "Squeezed Light," "First Light," "Janeen Romie," "A New Measure of the Universe," "Barry Barish: The Nobel Book," and "Into the Unknown," in which Stan Whitcomb talks about what will happen when LIGO detects a signal it can't explain.

EPISODE 9 - LIGO: A DISCOVERY THAT SHOOK THE WORLD from aLIGO Documentary Project on Vimeo.

Episode 3, So Many Staggering Insights about Our Universe (released February 22, 2018)