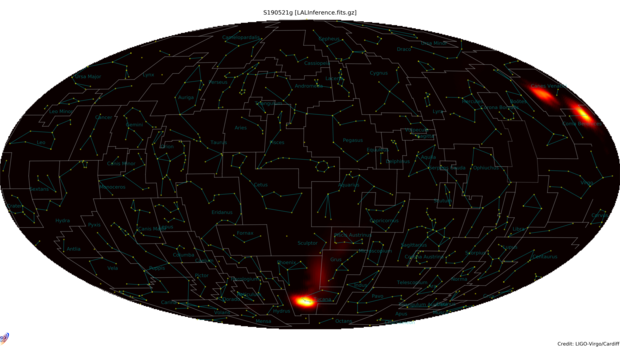 Sky-map showing likely (90%) location of gravitational-wave source on the sky for an event that occurred on May 21, 2019. (Credit: LIGO-Virgo/Cardiff Uni./C. North)

LIGO is just four months into its third observing run (O3) and there’s already a lot to be excited about. O3 began on April 1st, 2019 with high expectations for detections thanks to a series of upgrades that were made to both instruments after LIGO’s second observing run ended on August 25th, 2017.  Also joining O3 on April 1st was Virgo, the European-based gravitational-wave detector, located at the European Gravitational Observatory (EGO) in Italy, which almost doubled its sensitivity since its last run.

This is the first LIGO run using ‘squeezed light’ – specially prepared photon states that use the Heisenberg uncertainty principle to reduce the noise at high frequencies. In addition, mirrors were upgraded, the main laser power was increased, and other changes were made to bring up the sensitivity.

These improvements were expected to increase LIGO’s range by around 60%, enabling it to detect merging binary neutron stars (BNS) to a distance of 120-170 megaparsecs (Mpc), or 390-550 million light years. Binary black hole (BBH) mergers would be detectable at much greater distances because the waves they make are much higher in amplitude. 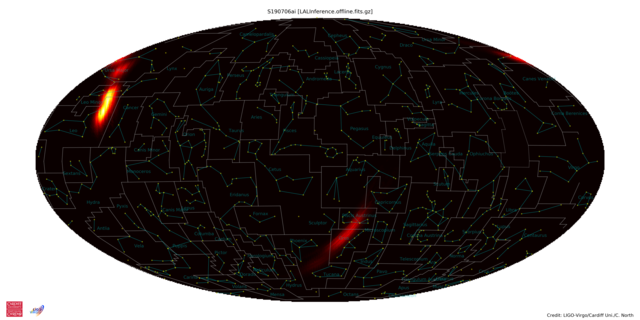 Sky-map showing likely (90%) location of gravitational-wave source on the sky for an event that occurred on July 6, 2019. Click for fullsize image. (www.gwcat.cardiffgravity.org/skymaps Credit: LIGO-Virgo/Cardiff Uni./C. North)

At the outset of O3, LIGO Livingston had already surpassed the lower 120 Mpc benchmark, reaching 140 Mpc (450 million light years distant), where they have remained for most of the run so far. LIGO Hanford (LHO) has maintained a range of just under 120 Mpc. We believe we know why LHO is not as sensitive, and some changes to improve the sensitivity will be implemented in an upcoming commissioning break when LIGO will temporarily halt the observing run (from October 1 to 31, with the run resuming on November 1). Other more serious improvements will have to wait until O3 has ended in May 2020, but are in the queue.

So how have these improvements impacted actual detections? Detection estimates calculated prior to O3 suggested that LIGO would detect at least a few BBH mergers per month, and possibly one BNS merger each month.

At 18 weeks into O3, it seems that this estimate was pretty good. By July 31st, 2019, LIGO had sent out 25 alerts to possible detections, three have since been retracted, leaving us with 22 ‘candidate’ gravitational wave events. We call them “candidates” because we still need time to vet all of them. If all candidates are verified, then the number of detections made by LIGO in just the first third of O3 will double the number of detections made in its first two runs combined.

The blue circles indicate days on which a candidate detection was made between the start of LIGO's third observing run (O3) on April 1, 2019 and July 31, 2019. They're called "candidates" because they have yet to be vetted by a thorough analysis process--something that can take months to complete. Note that two possible detections were made on May 21st. In this time, LIGO and Virgo (working together) have detected 22 candidate gravitational wave events. 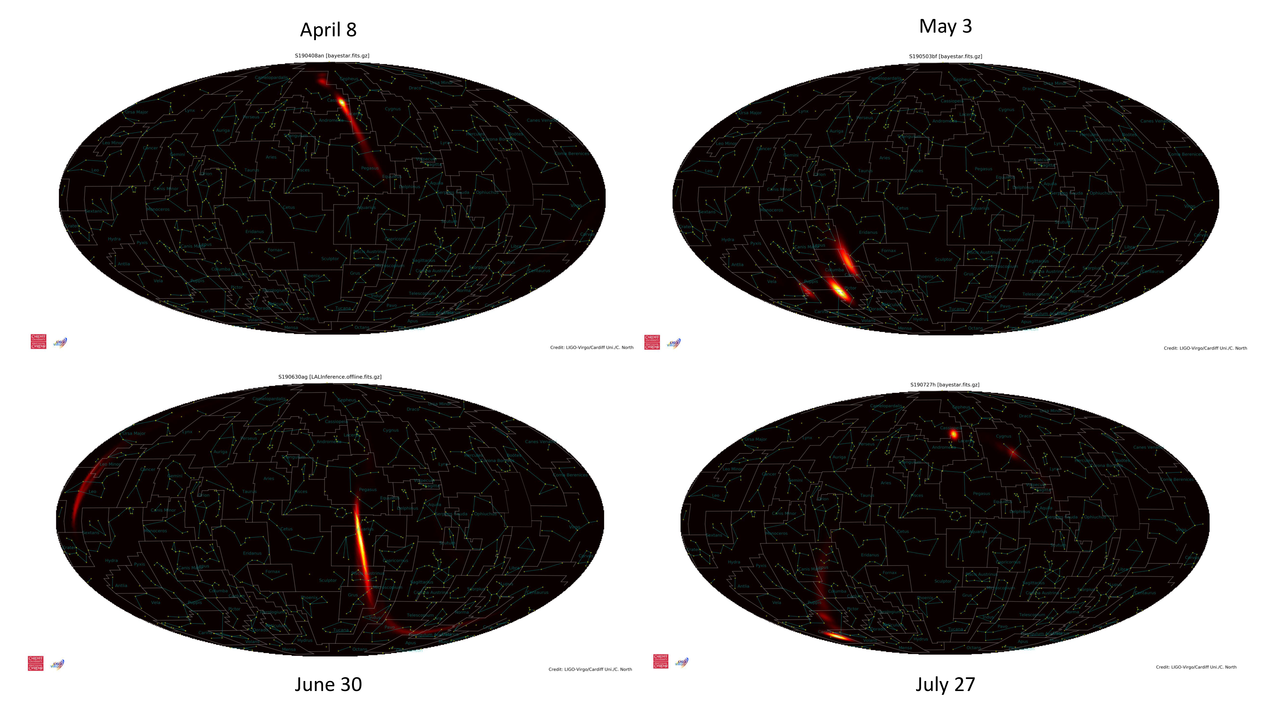 Four examples of maps showing the likely position on the sky of a candidate gravitational wave source. The orange blobs show the regions on the sky within which there is a 90% probability that each source lies. The size and shape of these regions depend on many factors, including how many detectors made the observation and how sensitive each detector was at the time. Click for full resolution image. (Credit: LIGO-Virgo/Cardiff Uni./C. North)

You can learn more about each of these (and subsequent candidates) by visiting the LIGO/Virgo detection alert page, GraceDB  or the UK-based GW Public Alerts page.

So far, no electromagnetic counterparts related to our public alerts have been observed, but all candidates are being actively analyzed by LSC/Virgo science teams. Certainly, the more candidates we detect, the better the chances that we’ll observe something new and exciting. But only time will tell whether we catch something we’ve never seen before.

Here are some more ways you can be part of the gravitational-wave detection adventure!