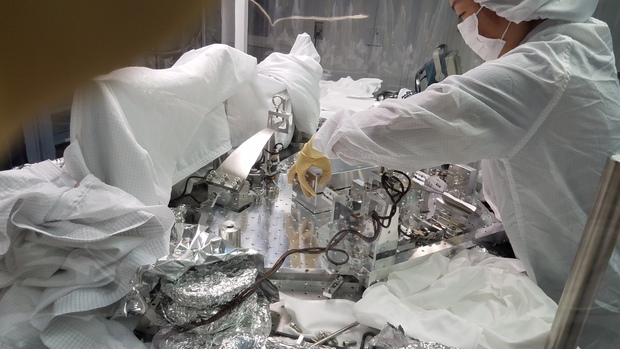 Grants from the U.S., United Kingdom, and Australia will fund next-generation improvements to LIGO

The National Science Foundation (NSF) is awarding Caltech and MIT $20.4 million to upgrade the Laser Interferometer Gravitational-wave Observatory (LIGO), an NSF-funded project that made history in 2015 after making the first direct detection of ripples in space and time, called gravitational waves. The investment is part of a joint international effort in collaboration with UK Research and Innovation and the Australian Research Council, which are contributing additional funds. While LIGO is scheduled to turn back on this spring, in its third run of the "Advanced LIGO" phase, the new funding will go toward "Advanced LIGO Plus." Advanced LIGO Plus is expected to commence operations in 2024 and to increase the volume of deep space the observatory can survey by as much as seven times.

"I'm extremely excited about the future prospects that the Advanced LIGO Plus upgrade affords gravitational-wave astrophysics," said Caltech's David Reitze, executive director of LIGO. "With it we expect to detect gravitational waves from black hole mergers on a daily basis, greatly increasing our understanding of this dark sector of the universe. Gravitational-wave observations of neutron star collisions, now very rare, will become much more frequent, allowing us to more deeply probe the structure of their exotic interiors."

Since LIGO's first detection of gravitational waves from the violent collision of two black holes, it has observed nine additional black hole mergers and one collision of two dense, dead stars called neutron stars. The neutron star merger gave off not just gravitational waves but light waves, detected by dozens of telescopes in space and on the ground. The observations confirmed that heavy elements in our universe, such as platinum and gold, are created in neutron star smashups like this one.

"This award ensures that NSF's LIGO, which made the first historic detection of gravitational waves in 2015, will continue to lead in gravitational-wave science for the next decade," said Anne Kinney, assistant director for NSF's Mathematical and Physical Sciences Directorate, in a statement. "With improvements to the detectors—which include techniques from quantum mechanics that refine laser light and new mirror coating technology—the twin LIGO observatories will significantly increase the number and strength of their detections. Advanced LIGO Plus will reveal gravity at its strongest and matter at its densest in some of the most extreme environments in the cosmos. These detections may reveal secrets from inside supernovae and teach us about extreme physics from the first seconds after the universe's birth."

Michael Zucker, the Advanced LIGO Plus leader and co-principal investigator, and a scientist at the LIGO Laboratory, operated by Caltech and MIT, said, "I'm thrilled that NSF, UK Research, and Innovation and the Australian Research Council are joining forces to make this key investment possible. Advanced LIGO has altered the course of astrophysics with 11 confirmed gravitational-wave events over the last three years. Advanced LIGO Plus can expand LIGO's horizons enough to capture this many events each week, and it will enable powerful new probes of extreme nuclear matter as well as Albert Einstein's general theory of relativity."

LIGO is funded by NSF and operated by Caltech and MIT, which conceived of LIGO and led the Initial and Advanced LIGO projects. Financial support for the Advanced LIGO project was led by the NSF, with Germany (Max Planck Society), the U.K. (Science and Technology Facilities Council), and Australia (Australian Research Council-OzGrav) making significant commitments and contributions to the project. More than 1,200 scientists from around the world participate in the effort through the LIGO Scientific Collaboration, which includes the GEO Collaboration. A list of additional partners is available at https://my.ligo.org/census.php. LIGO partners with the European Virgo gravitational-wave detector and its collaboration, consisting of more than 300 physicists and engineers belonging to 28 different European research groups.