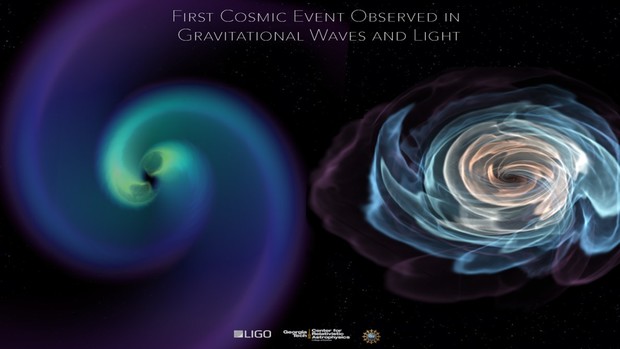 Neutron Star Merger Seen in Gravity and Matter This visualization shows the coalescence of two orbiting neutron stars. The right panel contains a visualization of the matter of the neutron stars.The left panel shows how space-time is distorted near the collisions. Credit: Karan Jani/Georgia Tech

Since LIGO's historic second observing run ended on August 25th, 2017, teams of scientists, engineers, and students at both LIGO Hanford and LIGO Livingston have been busy performing another round of maintenance and installing significant upgrades that will take us one step closer to our expected Design Sensitivity.

As of mid-September, 2018, LIGO Hanford has completed all of its planned maintenance and upgrades, and is presently engaged in 'commissioning' activities. LIGO Livingston has just wrapped up its upgrades and will soon begin commissioning. Commissioning is a process whereby the new-and-improved instrument is ‘tuned’ to bring it to a point of good sensitivity – a laborious process of noise hunting, optical alignment, and modifications of control system software. These activities have been underway for some weeks now and all signs point to improved sensitivity.

For now, the plan is for LIGO's third observing run ("O3") to begin around February 2019. This run is planned to be the longest yet in the history of LIGO's advanced detectors (first turned on in September of 2015). Advanced LIGO's first observing run (O1) was just 3.5 months long. In that time, two gravitational wave detections were made, including the history-making first on September 14, 2015. Our second observing run (O2) spanned November 30, 2016 to August 25, 2017 (nearly 9 months) in which time, history was made yet again, with the paradigm shifting discovery of merging neutron stars. With this success in our first two observing runs, hopes are running high that a full 12 months of continuous observing will reveal even more wonders.

Prior to beginning an official observing run, LIGO and Virgo will engage in what's called "Engineering Runs," currently planned for November 2018 and January 2019. These are test runs of all the instruments observing simultaneously. Engineering runs help LIGO and Virgo operators run the newly upgraded instruments, and to find and fix any remaining bugs in hardware and software before official observing begins.

As of mid-September 2018, LIGO Hanford successfully relocked its interferometer, but not quite in low-noise mode; Livingston has completed all of its hardware upgrades and is about to begin its commissioning stage. Virgo has made progress in improving its sensitivity, but they have yet to reach the target they want for O3.

So, while some work still needs to be done, progress is being swiftly made and all signs point to an early 2019 start to O3. We will post updates to the schedule as they become available.  Please check back frequently!
If you would like more detail on what's currently happening with the detectors, please visit Observatory Status