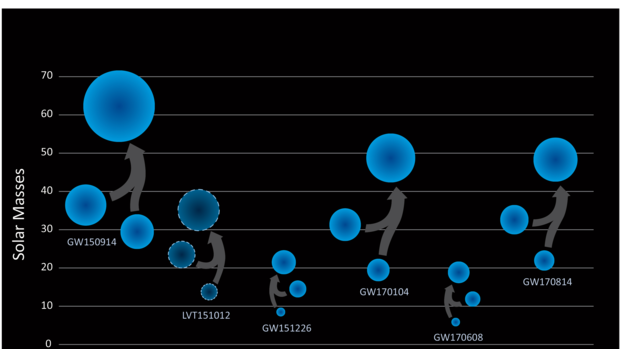 LIGO and Virgo announce the detection of a black hole binary merger from June 8, 2017

Scientists searching for gravitational waves have confirmed yet another detection from their fruitful observing run earlier this year. Dubbed GW170608, the latest discovery was produced by the merger of two relatively light black holes, 7 and 12 times the mass of the sun, at a distance of about a billion light-years from Earth. The merger left behind a final black hole 18 times the mass of the sun, meaning that energy equivalent to about 1 solar mass was emitted as gravitational waves during the collision.

This event, detected by the two NSF-supported LIGO detectors at 02:01:16 UTC on June 8, 2017 (or 10:01:16 pm on June 7 in US Eastern Daylight time), was actually the second binary black hole merger observed during LIGO’s second observation run since being upgraded in a program called Advanced LIGO.  But its announcement was delayed due to the time required to understand two other discoveries: a LIGO-Virgo three-detector observation of gravitational waves from another binary black hole merger (GW170814) on August 14, and the first-ever detection of a binary neutron star merger (GW170817) in light and gravitational waves on August 17.

A paper describing the newly confirmed observation, “GW170608: Observation of a 19-solar-mass binary black hole coalescence,” authored by the LIGO Scientific Collaboration and the Virgo Collaboration has been submitted to The Astrophysical Journal Letters and is available to read on the arXiv. Additional information for the scientific and general public can be found at http://www.ligo.org/detections/GW170608.php.

The fact that researchers were able to detect GW170608 involved some luck.

A month before this detection, LIGO paused its second observation run to open the vacuum systems at both sites and perform maintenance. While researchers at LIGO Livingston, in Louisiana, completed their maintenance and were ready to observe again after about two weeks, LIGO Hanford, in Washington, encountered additional problems that delayed its return to observing.

On the afternoon of June 7 (PDT), LIGO Hanford was finally able to stay online reliably and staff were making final preparations to once again “listen” for incoming gravitational waves.  As part of these preparations, the team at Hanford was making routine adjustments to reduce the level of noise in the gravitational-wave data caused by angular motion of the main mirrors. To disentangle how much this angular motion affected the data, scientists shook the mirrors very slightly at specific frequencies.  A few minutes into this procedure, GW170608 passed through Hanford’s interferometer, reaching Louisiana about 7 milliseconds later.

LIGO Livingston quickly reported the possible detection, but since Hanford’s detector was being worked on, its automated detection system was not engaged. While the procedure being performed affected LIGO Hanford’s ability to automatically analyze incoming data, it did not prevent LIGO Hanford from detecting gravitational waves. The procedure only affected a narrow frequency range, so LIGO researchers, having learned of the detection in Louisiana, were still able to look for and find the waves in the data after excluding those frequencies. For this detection, Virgo was still in a commissioning phase; it started taking data on August 1.

More to learn about black holes

Despite their relatively diminutive size, GW170608’s black holes will greatly contribute to the growing field of “multimessenger astronomy," where gravitational wave astronomers and electromagnetic astronomers work together to learn more about these exotic and mysterious objects.

The LIGO and Virgo detectors are currently offline for further upgrades to improve sensitivity. Scientists expect to launch a new observing run in fall 2018, though there will be occasional test runs during which detections may occur.

LIGO and Virgo scientists continue to study data from the completed O2 observing run, searching for other events already "in the can," and are preparing for the greater sensitivity expected for the fall O3 observing run.

LIGO is funded by the NSF, and operated by Caltech and MIT, which conceived of LIGO and led the Initial and Advanced LIGO projects. Financial support for the Advanced LIGO project was led by the NSF with Germany (Max Planck Society), the U.K. (Science and Technology Facilities Council) and Australia (Australian Research Council) making significant commitments and contributions to the project. More than 1,200 scientists and some 100 institutions from around the world participate in the effort through the LIGO Scientific Collaboration, which includes the GEO Collaboration and the Australian collaboration OzGrav. Additional partners are listed at http://ligo.org/partners.php

The Virgo collaboration consists of more than 280 physicists and engineers belonging to 20 different European research groups: six from Centre National de la Recherche Scientifique (CNRS) in France; eight from the Istituto Nazionale di Fisica Nucleare (INFN) in Italy; two in the Netherlands with Nikhef; the MTA Wigner RCP in Hungary; the POLGRAW group in Poland; Spain with the University of Valencia; and the European Gravitational Observatory, EGO, the laboratory hosting the Virgo detector near Pisa in Italy, funded by CNRS, INFN, and Nikhef.