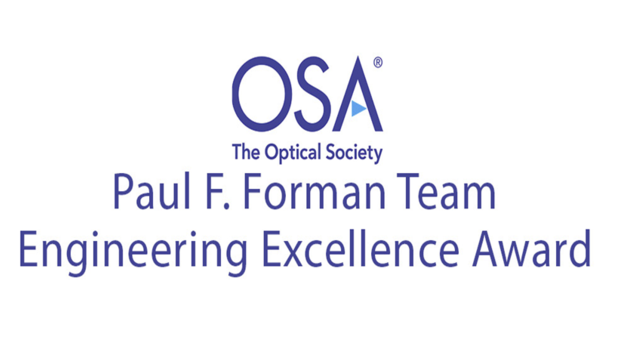 LIGO is pleased to announce that The Optical Society (OSA) has selected the Advanced LIGO Engineering Team as the 2016 recipient of the Paul F. Forman Team Engineering Excellence Award. The team was nominated for innovative engineering creating the most sensitive measurement instrument ever built, leading to the first direct detection of gravitational waves. LIGO's discovery is considered by the OSA to be "among the most significant in the last century of physics."

The OSA chose to awared the Advanced LIGO engineering team for "Overcoming a daunting list of engineering challenges; the LIGO team connected optical, electrical and mechanical elements of advanced interferometry to find engineering success at the limits of human endeavor."

The Advanced LIGO engineering team was comprised of individuals from a number of research organizations in the LIGO Scientific Collaboration, led by Caltech and MIT which form the LIGO Laboratory. The award is being given to 90 people who played important engineering roles in bringing the Advanced LIGO Project to fruition, with Dennis Coyne (Advanced LIGO Chief Engineer) as the team leader.

“After 20 years of dedicated effort, LIGO's direct detection of gravitational waves from a binary black hole merger is incredibly rewarding and exciting! This enormous discovery was only possible due to the visionary support of the National Science Foundation and the incredibly hard work of an extremely talented team of scientists and engineers. I am deeply grateful and proud to have played a part in the launch of this new field of observational cosmology.” said Coyne.

The OSA will present this award at Frontiers in Optics (FiO 2016), OSA’s 100th Annual Meeting, in Rochester, New York in October 2016, followed by an article in Optics & Photonics News on this year’s awardees. For the full story and the full list of recipients, visit the OSA's Paul F. Forman Team Engineering Excellence Award announcement page.

The Paul F. Forman Team Engineering Excellence Award was established by The Optical Society in 1989 and in 2007 was named in honor of Paul F. Forman, who, among many other accomplishments, raised the visibility of optical engineering. This team award recognizes technical achievements such as product engineering, process, software and patent development, as well as contributions to society such as engineering education, publication and management, and furthering public appreciation of optical engineering.