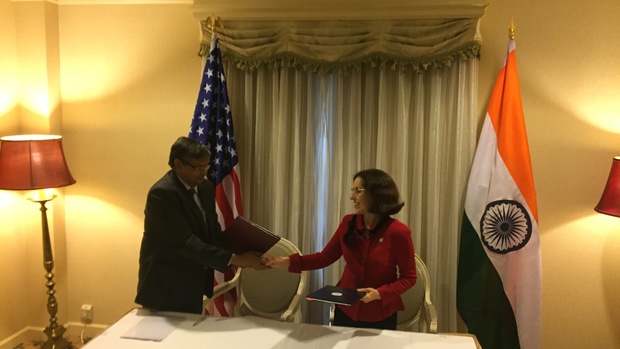 NSF Director, France Córdova shakes the hand of Sekhar Basu, India's Secretary of the Department of Atomic Energy after signing the Memorandum of Understanding securing India as the site of the third LIGO detector.

On Thursday, March 31st, 2016, National Science Foundation (NSF) Director, France A. Córdova signed a Memorandum of Understanding (MOU) to lead the way for establishing an advanced gravitational-wave detector in India. The MOU was also signed by the Secretary of India's Department of Atomic Energy and the Secretary of India's Department of Science and Technology (India's equivalent to the NSF).

Why are so many gravitational wave detectors necessary? As is often the case, more is better, and this is especially true when detecting gravitational waves. One of the biggest reasons is that at least three detectors are needed for scientists to "triangulate" the sources of gravitational waves on the sky – in much the same way that three cell phone towers are required to identify the location of a cell phone. Equally as important, with more than four detectors in a network, the likelihood increases very quickly that at least three, or better still, four will be operating at any given time. A five-detector network provides five different sets of four detectors and ten different sets of three detectors. So, while two detectors may be sufficient to confirm a detection (as was the case for GW150914), three or more will allow scientists to home in on the position of sources of gravitational waves on the sky.

Adding detectors is especially important to the nascent field of gravitational wave astronomy. LIGO has already partnered with dozens of astronomical observatories that are ready to hunt for electromagnetic (EM) radiation (e.g. visible light, radio waves, gamma rays, etc.) or even neutrinos emanating from the cataclysmic events responsible for creating detectable gravitational waves. But if astronomers want to find such traces of light or exotic particles, gravitational wave scientists need to tell them where to look, and as soon as possible after the wave's arrival, in case EM signals are fleeting. A third detector is crucial to this effort. 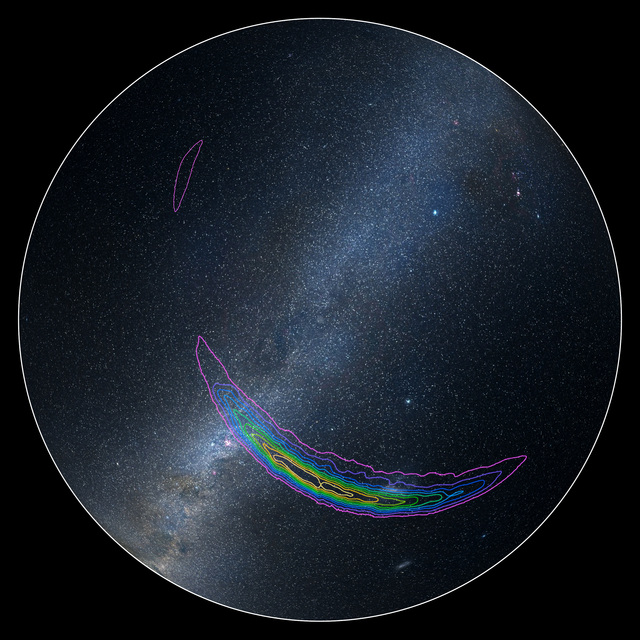 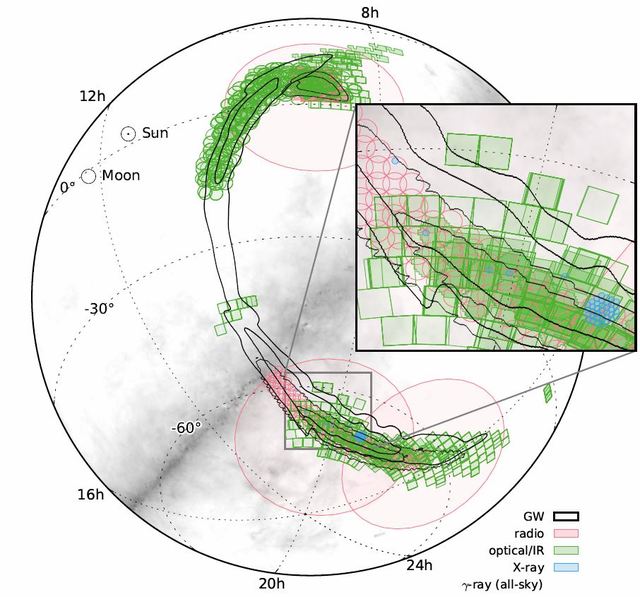 Astronomers observing in a wide range of wavelengths conducted an extensive search for EM counterparts to GW150914. The inset reveals how small the areas covered by observatories were. No EM signals were found. Image credit: LIGO Scientific Collaboration and Virgo Collaboration.

With only two detectors, finding an EM counterpart to a gravitational wave source is very difficult. And unfortunately, when LIGO made its historic discovery in September 2015, Virgo was not operating, leaving only LIGO’s two detectors the task of figuring out where the waves came from.

Based on GW150914's arrival time at Livingston and Hanford, LIGO scientists created a map of the sky (left) outlining the regions most likely to contain the source of the waves (with two detectors, the region is shaped like a ring, or an arc). They determined that there was a 90 percent chance the source was located somewhere within the areas outlined in purple. These are enormous swaths of sky, as illustrated in the image at right. (Click on the images for larger versions.) Despite the extensive search by astronomers, no electromagnetic counterpart was found. 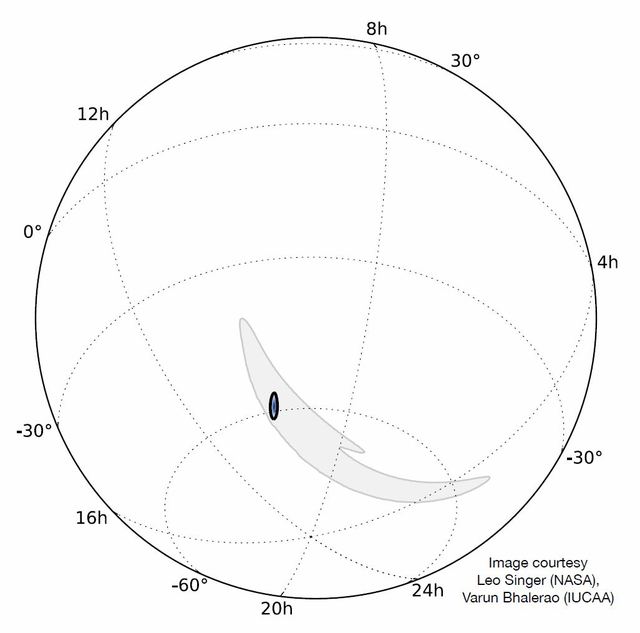 Improvement in the localization of GW150914 by adding LIGO India. The small oval represents the size of the search area if LIGO India had been operating at the time of the detection. Note that the oval could have been located anywhere within the shaded area. (Click to enlarge.)

Clearly, with data from just two detectors, there isn't much hope of finding an electromagnetic signature associated with a gravitational wave generator.

All of this changes with a third detector (or more). The image at left shows just how much smaller the search area could have been for GW150914 with a third detector in India. Notice that the area changes from a large arc on the sky, to a small localized ellipse (which could have appeared anywhere within the shaded area). A fourth or fifth operating gravitational wave detector would shrink the ellipse even more. The benefit? The smaller the search area, the greater the chances that astronomers will find an EM signature.

The initial LIGO detection in September 2015 opened the new gravitational- wave window on the Universe. A LIGO network of three detectors separated by intercontinental baselines will enable astronomers to peer through this window and identify gravitational-wave sources by their electromagnetic counterparts.

The NSF press release announcing the signing of the MOU is available here: http://www.nsf.gov/news/news_summ.jsp?cntn_id=138171&org=NSF&from=news