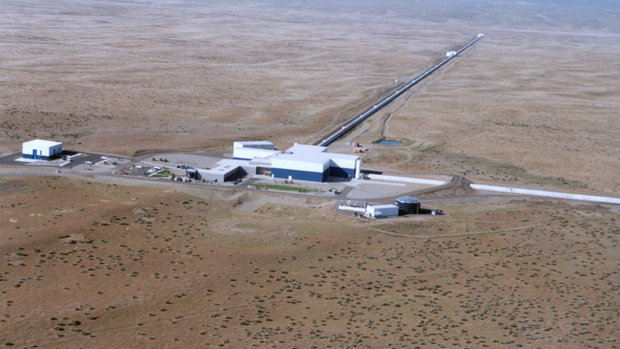 Aerial view showing the expansiveness of LIGO's interferometers. Here, one full arm of the Hanford interferometer is shown, reaching 4 km into the desert. (Credit: Caltech/MIT/LIGO Lab)

The Countdown to First Observations has Begun

After a meticulous 5-year re-build, LIGO, the Laser Interferometer Gravitational-wave Observatory has now begun preparing for its first science run employing the new Advanced LIGO Detector. During the week of September 14th, 2015, LIGO’s twin interferometers in Washington State and Louisiana will begin a new, improved, and much deeper search for gravitational waves, the ripples in space-time generated by some of the most cataclysmic and energetic events in the Universe such as merging black holes and exploding stars.

The anticipation of this event is quickly building among the hundreds of collaborating scientists involved with the LIGO Scientific Collaboration (LSC).

While September marks the official start of LIGO’s first observing session, it won’t simply commence with the push of a button on that day. Rather it will begin at the culmination of a month-long preparation process. During the month of August, LIGO's systems for stabilizing it enough to detect gravitational waves will be tested, and major changes to software or systems will be halted. Beginning on August 17th, both LIGO Hanford and LIGO Livingston will fire up their interferometers for a week, in which time feedback and control settings will be established and set, lingering software bugs will be identified and repaired, and all aspects of the two machines will be finely tuned so they're ready to detect gravitational waves.

Finally, when the okay is given to begin the new search, all this frenetic activity will cease and the LIGO interferometer sites will fall silent. Dr. Landry describes what this moment will be like.

The smallest interference from vibrating devices could confuse the interferometers and cause false gravitational wave signals that data analysts will have to tease out.

LIGO’s first observing run will last three months. Operators at Hanford and Livingston will work around the clock, checking the quality of the data, and keeping the interferometers online to collect as much data as they can during that window.

LIGO scientists are optimistic for this first observing run. When LIGO’s dual interferometers begin collecting data, they'll be able to listen for gravitational waves three times farther away than the previous version of LIGO was able to achieve, even after six years of operation.

In addition, in the not-too-distant future, LIGO will not be operating alone: when it comes back online, the French-Italian Virgo gravitational wave detector will add a third comparably sensitive detector to what will be a global network of interferometers working toward a common goal.

More importantly, since gravitational waves are not part of the electromagnetic (EM) spectrum but the objects generating them (such as merging black holes and exploding stars) emit EM radiation, LIGO and Virgo have jointly established agreements with 70 astronomical observatories around the world to search for electromagnetic signals (e.g. visible light) associated with gravitational wave sources, should LIGO detect one. LIGO’s EM partners are in place and fully prepared to help out during this first observing run, and all observing runs to follow.

LIGO's new round of observations will not begin with a bang, or with cheers and much fanfare--at least not at each site--but rather in near perfect silence. Just as the beginning of a grand opera begins with dimming lights, a quieting orchestra, and a hushed audience, so too will LIGO's new hunt for gravitational waves begin. Come mid-September, the stage will be set and the curtain will rise on LIGO’s quest to open a new window on the Universe.