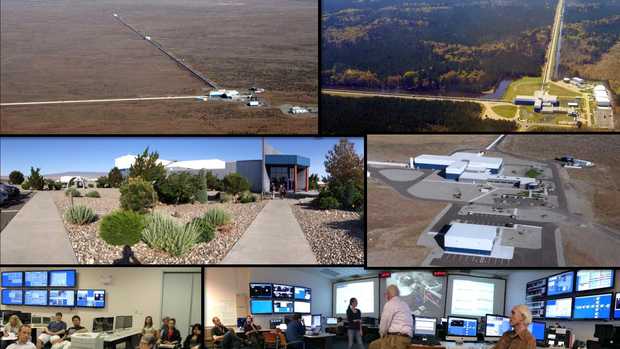 After a series of upgrades, the twin detectors of LIGO, the Laser Interferometer Gravitational-wave Observatory, have turned back on and resumed their search for ripples in the fabric of space and time known as gravitational waves. LIGO transitioned from engineering test runs to science observations at 8 a.m. Pacific Standard Time on November 30.

On February 11, 2016, the LIGO Scientific Collaboration (LSC) and the Virgo Collaboration announced that LIGO had made the first-ever direct observation of gravitational waves. The waves were generated by a tremendously powerful collision of two black holes 1.3 billion light-years away and were recorded by both of LIGO's detectors—one in Hanford, Washington, and the other in Livingston, Louisiana. A second gravitational-wave detection by LIGO was announced on June 15, 2016, also from merging black holes.

The initial detections were made during LIGO's first run after undergoing major technical upgrades in a program called Advanced LIGO. That run lasted from September 2015 to January 2016. Since then, engineers and scientists have been evaluating LIGO's performance and making improvements to its lasers, electronics, and optics—resulting in an overall increase in LIGO's sensitivity.

"For our first run, we made two confirmed detections of black-hole mergers in four months," says Caltech's Dave Reitze, executive director of the LIGO Laboratory, which operates the LIGO observatories. "With our improved sensitivity, and a longer observing period, we will likely observe even more black-hole mergers in the coming run and further enhance our knowledge of black-hole dynamics. We are only just now, thanks to LIGO, learning about how often events like these occur."

The Livingston detector now has about a 25 percent greater sensitivity—or range for detecting gravitational waves from binary black holes—than during the first observing run. That means it can see black-hole mergers at further distances than before, and therefore should see more mergers than before. The sensitivity for the Hanford detector is similar to that of the first observing run.

"The Livingston detector has improved sensitivity for lower gravitational-wave frequencies, below about 100 hertz, primarily as the result of reducing the level of scattered light, which can be a pernicious source of noise in the interferometers," says Peter Fritschel, the associate director for LIGO at MIT and LIGO's chief detector scientist. "This is important for detecting massive systems like the merger of two black holes. We are confident that we'll see more black-hole mergers."

"LIGO Hanford scientists and engineers have successfully increased the power into the interferometer, and improved the stability of the detector,” says Caltech's Mike Landry, the head of LIGO Hanford Observatory. "Significant progress has been made for the future utilization of still higher power, which will ultimately lead to improved sensitivity in future runs. Furthermore, with the addition of specialized sensors called balance-beam tilt meters in the corner and end stations, the detector is now more stable against wind and low-frequency seismic motion, thereby increasing the amount of time the detector can be in observing mode."

The LIGO team will continue to improve the observatories' sensitivities over the coming years, with increases planned for each successive observing run. As more black-hole mergers are detected by LIGO, scientists will start to get their first real understanding of black-hole pairs in the universe—including their population numbers, masses, and spin rates. LIGO may also detect the merger of neutron stars—the dense cores of exploded stars. Knowledge of both black-hole and neutron-star mergers will improve our understanding of stellar evolution and death.

"LIGO's scientific and operational staff have been working hard for the past year and are enthusiastic to restart round-the-clock observations. We are as curious as the rest of the world about what nature will send our way this year," says LIGO Livingston Observatory head Joe Giaime of Caltech and Louisiana State University.

Caltech and MIT conceived of, built, and operate the LIGO Observatories, with funding provided by the National Science Foundation (NSF). The Advanced LIGO detector was constructed by Caltech and MIT with funding from NSF and contributions from LSC institutions worldwide, including the Max Planck Society in Germany, the Science and Technology Facilities Council (STFC) in the U.K., and the Australian Research Council, among many others.

LIGO research is carried out by the international LIGO Scientific Collaboration (which includes the GEO Collaboration and the Australian Consortium for Interferometric Gravitational Astronomy) and the Virgo Collaboration in Europe.

More information about LIGO and its partners can be found at www.ligo.caltech.edu and www.ligo.org.