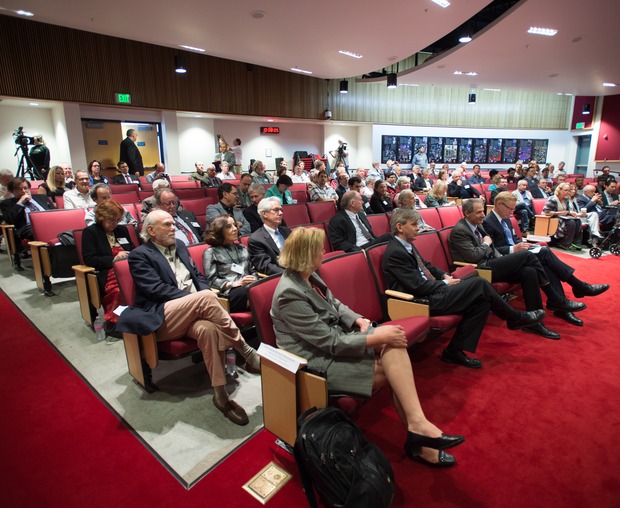 The Advanced LIGO Project, a major upgrade that will increase the sensitivity of the LIGO instruments by a factor of 10 and provide a 1,000-fold increase in the number of astrophysical candidates for gravitational wave signals, was officially dedicated on May 19, 2015 in a ceremony held at the LIGO Hanford facility in Richland, Washington.

"We've spent the past seven years putting together the most sensitive gravitational-wave detector ever built. Commissioning the detectors has gone extremely well thus far, and we are looking forward to our first observing run with Advanced LIGO beginning later in 2015. This is a very exciting time for the field," said Caltech's David H. Reitze, executive director of the LIGO Project, in his address to those in attendance.

Director of the National Science Foundation, France Córdova also spoke to the audience.

"Advanced LIGO represents a critically important step forward in our continuing effort to understand the extraordinary mysteries of our universe," she said. "It gives scientists a highly sophisticated instrument for detecting gravitational waves, which we believe carry with them information about their dynamic origins and about the nature of gravity that cannot be obtained by conventional astronomical tools."

Tom Soifer, Caltech Professor of Physics added, "This is a particularly thrilling event, marking the opening of a new window on the universe, one that will allow us to see the final cataclysmic moments in the lives of stars that would otherwise be invisible to us".

The change of more than a factor of 10 in sensitivity also comes with a significant increase in the sensitive frequency range. This will allow Advanced LIGO to look at the last minutes of the life of pairs of massive black holes as they spiral closer, coalesce into one larger black hole, and then vibrate much like two soap bubbles becoming one. It will also allow the instrument to pinpoint periodic signals from the many known pulsars that radiate in the range from 500 to 1,000 Hertz (frequencies that correspond to high notes on an organ).

Advanced LIGO will also be used to search for the gravitational cosmic background—allowing tests of theories about the conditions present in the universe just 10-35 seconds after the Big Bang.