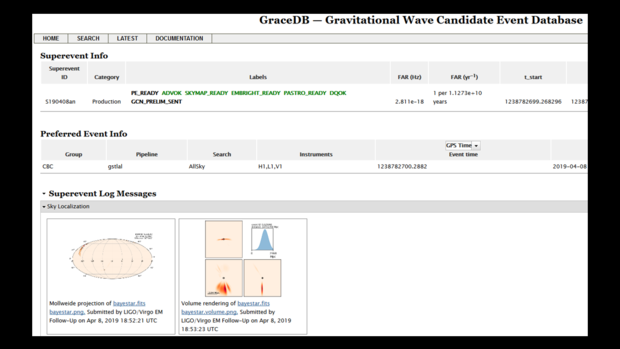 Part of the new LIGO/Virgo public gravitational wave alert page. The public can keep track of and learn about the latest public alerts at https://gracedb.ligo.org/latest/

The LIGO Scientific and Virgo Collaborations are excited to announce that they have sent out their first ever “public alert”, informing the world at large of a possible gravitational wave detection. Beginning with this current observing run (dubbed O3 for the third observing run with advanced detectors), LIGO and Virgo will publicly announce candidate gravitational wave triggers with a high likelihood of astrophysical origin within minutes of the waves arriving in the three detectors (LIGO Hanford, LIGO Livingston, and Virgo).

"In O3 we transitioned to a system whereby LIGO and Virgo alert the electromagmetic (EM) astronomy community almost immediately that we  have a statistically significant trigger; that is, a potential gravitational wave (GW) detection. The rationale for this is simple: The sooner we reveal a GW source, the sooner EM telescopes (X-ray, UV, optical, radio) can search for and hopefully find an electromagnetic signal from the same source. Capturing the EM signal as soon as possible is, in many cases, the key to understanding the dynamics of the event, revealing its true nature."

"Public alerts will allow astronomers around the world to react quickly to gravitational-wave events, and find counterparts across the electromagnetic spectrum. Gravitational-wave astronomy is still very new, and has a huge potential for discovery.”

This first public gravitational wave alert, sent out April 8, 2019, describes what is believed to be a binary black-hole merger that occurred some 4-billion light years away (1473 +/- 358 Mpc). LIGO’s Hanford and Livingston observatories and the Virgo detector in Italy were all in observation mode at the time and contributed to the detection. Combining the data obtained by each site yielded the sky-map seen below. 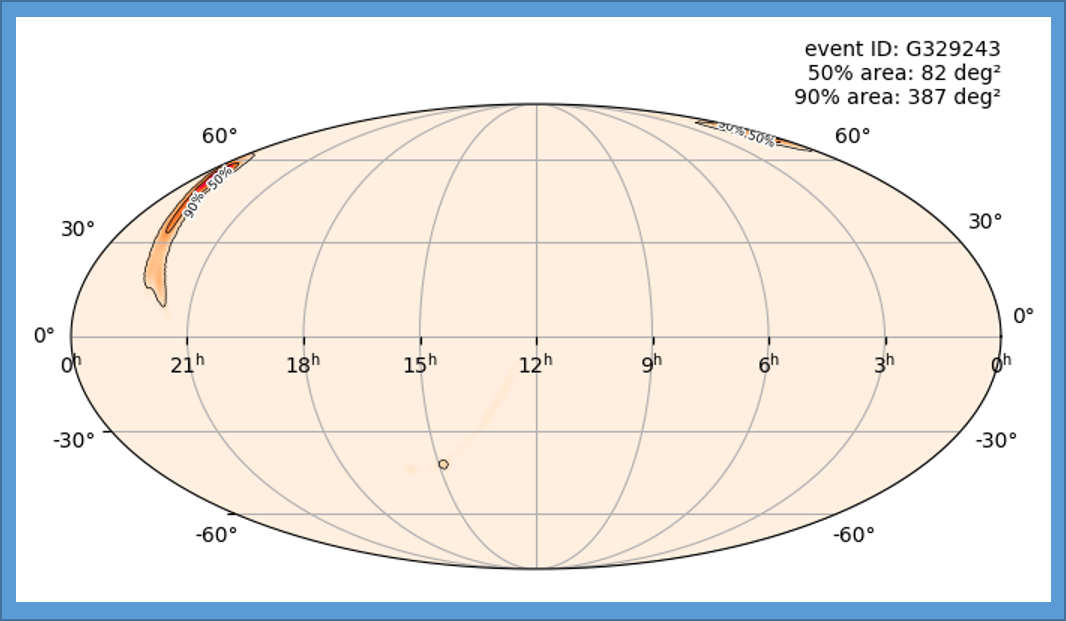 The region of sky believed to contain the source of the gravitational wave detected on April 8, 2019. The area spans 387 square degrees, equivalent to nearly 2000 full-Moons, roughly meandering through the constellations Cassiopeia, Lacerta, Andromeda, and Cepheus in the northern hemisphere. Credit: LIGO/Caltech/MIT

Gravitational wave public alerts will include a sky-map showing the possible location of the source on the sky, the time of the event, and what kind of event it is believed to be (e.g., binary black hole merger, black hole/neutron star merger, or binary neutron star merger). More detailed information about candidate events will be published at a later date after each one has been properly vetted and studied.

The public can keep track of public alerts at https://gracedb.ligo.org/latest/, and iPhone users can even get an app to receive alerts as they happen! Find it here: Gravitational Wave Events iPhone App

LIGO and Virgo anticipate that this is just the first of many public alerts yet to be distributed in the coming year. O3 began April 1, 2019 and is expected to last at least 12 months.