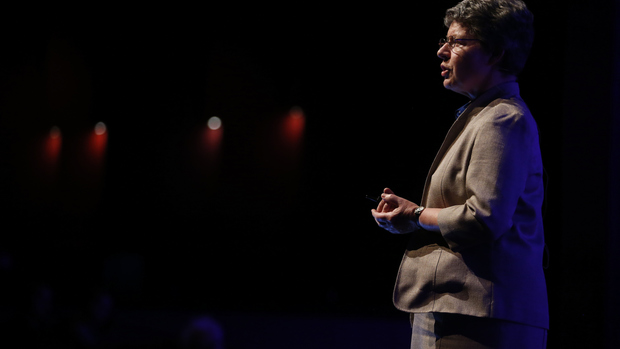 Astrophysicist, Jocelyn Bell Burnell is best known for her discovery of pulsars, considered one of the greatest astronomical discoveries of the twentieth century. Credit: Conor McCabe Photography.

The LIGO Lab and LIGO Scientific Collaboration are heartily congratulating Jocelyn Bell Burnell for becoming just the fourth recipient of the Special Breakthrough Prize in Fundamental Physics, a $3 million dollar prize bestowed to a scientist or group of scientists deemed to have made significant discoveries in or contributions to science.

Burnell is being recognized for her astute observation of odd repeating ‘blips’ in radio telescope data gathered while she was a graduate student at Cambridge University in 1967. Initially, many believed these signals were man-made, but Burnell tenaciously followed up on the anomaly, proving that they were not of this Earth. The blips were later attributed to a then only-theorized exotic star called a radio pulsar. Pulsars are rotating neutron stars that emit a narrow beam of radio waves like a lighthouse. If the Earth is in the beam's path, we detect a radio pulse each time it sweeps across the Earth as the star itself rotates.

Dr. Edward Witten, the chair of the selection committee said, in a statement released by the Breakthrough Prize Committee:

“Jocelyn Bell Burnell’s discovery of pulsars will always stand as one of the great surprises in the history of astronomy. Until that moment, no one had any real idea how neutron stars could be observed, if indeed they existed. Suddenly it turned out that nature has provided an incredibly precise way to observe these objects, something that has led to many later advances.”

Indeed, astronomers have continued to search for and study neutron stars in the cosmos, as they are excellent laboratories for studying general relativity and other extreme environs in the Universe.

Coincidentally, at around the same time as Bell’s discovery, LIGO’s Rai Weiss, then MIT professor, was thinking about how astronomers could detect (also then only theoretical) gravitational waves, predicted to emanate from dense, massive objects like neutron stars. In fact, LIGO was specifically designed to detect gravitational waves from just the sort of objects that Bell Burnell discovered. Such a long-awaited event was finally observed last year, when LIGO and Virgo detected two colliding neutron stars. This discovery led to a paradigm shift in our understanding of the origins of heavy elements in the periodic table. LIGO continues to search for gravitational-wave ‘blips’ from neutron stars to complement the observations that Burnell made in radio signals.

Without Burnell’s careful observation and persistence in alerting her thesis supervisor about the strange signals these mysterious objects and their treasure-trove of information about the Universe could have remained unknown to science for many years.

Burnell is also being recognized for her “lifetime of inspiring scientific leadership”, according to the Breakthrough Prize committee. True to form, Burnell has decided to donate her entire $3 million prize to the United Kingdom’s Institute of Physics, to fund scholarships for students from groups underrepresented in science who want to study physics.