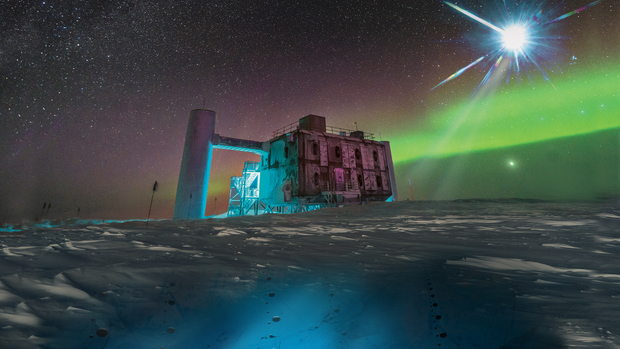 The LIGO Laboratory congratulates the IceCube neutrino observatory team on its recent multimessenger astronomy success! On Thursday, July 12, 2018, a team of researchers from IceCube revealed that, with the assistance of their electromagnetic (EM) astronomy partners, they had located the origin of a single neutrino detected by the Antarctica-based observatory on September 22, 2017. The source of the neutrino was determined to be an ‘active’ supermassive black hole (something astronomers call an Active Galactic Nucleus, or a blazar) in the heart of a galaxy some 4-billion light years away. Astonomers suspect that supermassive black holes, weighing 100's of thousands to BILLIONS of times the mass of our Sun, reside at the centers of most galaxies. When one of these objects gobbles up, or accretes matter, like a cosmic blow-torch, it spits out a jet of energy spanning the EM spectrum, and highly energized particles called neutrinos. This is the 'blazar'.

This discovery lays another brick in the foundation of multimessenger astronomy, an emerging scientific endeavor whereby EM astronomers and non-EM astronomers (like those at IceCube and LIGO) share results to make new discoveries, or to solve long-standing mysteries in astrophysics. With this discovery, IceCube and its partners have provided very strong evidence of at least one source of high-energy neutrinos—extremely energetic, virtually massless particles that are so tiny, they can travel at nearly the speed of light for billions of years without striking another atom (trillions of neutrinos from the Sun and around the Universe pass through each of us and the Earth every second!) Since they carry no electric charge, neutrinos aren't affected by magnetic fields, allowing them to travel through the Universe in straight lines. So when a neutrino struck an atom in IceCube's detector last September, the IceCube team was able to trace its path back to a patch of sky. Then searching this patch of sky with telescopes, EM astronomers spotted the light from a blazar. Careful study revealed it to be the origin of the neutrino. Until this announcement was made, astronomers only speculated on the types of phenomena or objects that could create such highly energized particles. Now, at least one source has been confirmed: active galactic nuclei, or blazars.

The last time a neutrino was directly associated with an observed astronomical event was in 1987 when a supernova, a massive star collapsing in on itself and then blowing itself up at the end of its life, was discovered in the Large Magellanic Cloud (LMC)—one of the Milky Way’s companion galaxies a mere 168,000 light years away. In that event, dubbed SN (for supernova) 1987A, 25 neutrinos were detected by three neutrino observatories around the world. What IceCube and its partners detected was something altogether different, however. The galaxy that spit out this single neutrino was 24,000 times farther away than the LMC, and the neutrino itself was 10,000 times more energetic than the ones associated with SN1987A!

LIGO is thrilled that IceCube and its EM partners have were able to catch this multimessenger event. We eagerly await the day when EM astronomers, LIGO, and IceCube can all make detections of the same singular astrophysical event, solving even more mysteries hidden in the deepest regions of the Universe.

For more on IceCube’s discovery, on neutrinos, neutrino astronomy, and what we can learn from these mysterious particles, visit the IceCube website at: https://icecube.wisc.edu/gallery/press/view/2239 or the University of Wisconsin, Madison IceCube group website at: https://news.wisc.edu/cosmic-rays/

NSF's IceCube was built specifically to identify and track high-energy neutrinos. It sighted the first neutrinos from beyond our galaxy in 2013 and since has made numerous fundamental measurements in neutrino astronomy, which helps scientists make sense of matter in its most elementary forms.